Egyptian media, politicians accuse Israel of luring Egyptian athletes to play on its teams at home and worldwide

Tensions over Israel's peace treaty with Egypt have been sidelined in recent weeks by an issue no less important – soccer. According to Egyptian media reports, the local parliament has accused the Jewish state of poaching players of Egyptian heritage for the Israeli premier league.

Egyptian television first touched on the issue, mentioning Mahmoud Abbas of the Hapoel Tel Aviv team, George Imses of Bnei Yehuda and several members of Bnei Sakhnin as examples of athletes of Egyptian origin who have opted to play for Israel. According to the report, there are also 150 Arab players who are part of various Israeli soccer teams.

The head of Egypt's Defense and National Security Committee, Ahmed Ismail, has requested People's Assembly to "carefully study the possibility that Israel might be pulling or even luring Egyptian athletes to play for (its teams) at international capacity as well." 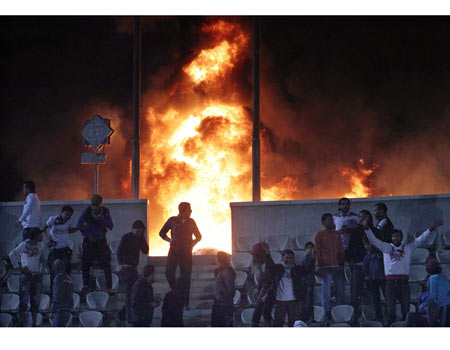 Mohamed Hafez, who heads the Assembly's Youth and Sports Committee, demanded in response the athletes to return to Egypt. He said that he is meeting with senior officials in the sports industry in an effort to prevent such "unacceptable" incidents from repeating.

Over the weekend, a man was killed and dozens were injured in a violent protest held by fans of the Al-Masry soccer team in Port Said. The mob rallied against the Egyptian Football Association's decision to ban the group from all activity for the next two years, in punishment for last month's devastating riots, which lead to the deaths of more than 70 fans.