Footage from Merah's deadly attacks on soldiers, Jewish school sent on USB key; 'we are not a sensationalist channel,' Arab TV network says

Al-Jazeera said Tuesday it will not air a video that appears to show the attacks on soldiers and a Jewish school in southwestern France earlier this month from the killer's point of view, including the cries of his victims.

French President Nicolas Sarkozy, other French officials and family members of the victims had asked that it not be broadcast.

The footage was contained on a USB key sent with a letter to the Paris office of the Qatar-based television company, Zied Tarrouche, the station's Paris bureau chief, said Tuesday on the French TV station BFM. The letter, written in poor French with spelling and grammar errors, claimed the shootings were carried out in the name of al-Qaeda.

Police traced the attacks to Mohamed Merah, a 23-year-old Frenchman, who was killed last week after a more than 30-hour standoff with police at his apartment building. Merah had claimed to police that he had links to al-Qaida, traveled to Afghanistan, and received weapons training in the terrorist-riddled Pakistani tribal region of Waziristan. But authorities have questioned some of Merah's claims.

Prosecutors have said that Merah filmed all of his attacks, which began March 11 with the murder of a French soldier. Before the spree ended, two more soldiers and three Jewish children and a rabbi were killed. 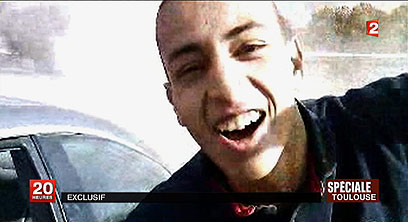 "In accordance with Al Jazeera's Code of Ethics, given the video does not add any information that is not already in the public domain, its news channels will not be broadcasting any of its contents," the broadcaster said in a statement.

The channel said the video was received from an anonymous source on Monday and that Al-Jazeera immediately gave it to French police.

A French official close to the investigation said it was not sent by Merah. Speaking on condition of anonymity because of the sensitivity of the case, he said that technical experts have concluded that the video was sent on Wednesday from near southern Toulouse, the same day that Merah was trapped in his apartment by the predawn police raid.

Al-Jazeera said it had received many requests by media to look at the video, but that it would deny all of them.

Tarrouche, the Paris bureau chief, said the images appear to have been taken from the point of view of the killer, perhaps from a camera hung around his neck. He said they were a bit shaky but of a high technical quality.

The video had clearly been manipulated after the fact, according to Tarrouche, with religious songs and recitations of Quranic verses laid over the footage.

"You can hear gunshots at the moment of the killings. You can hear the voice of this person who has committed these assassinations. You can hear also the cries of the victims, and the voices were distorted," Tarrouche said.

In an address to police officers and judges earlier Tuesday, Sarkozy had asked that the images not be broadcast.

Tarrouche said the Paris prosecutor, whose office is leading the investigation, had also called to explain the consequences of disseminating the images. But Tarrouche said the prosecutor said he would not prohibit the channel from "doing its work as journalists."

"We are not a sensationalist channel. We're not looking to broadcast images without weighing the risks and the consequences. That's why the management will decide today after meeting at headquarters in Qatar," Tarrouche said.

The decision not to broadcast the images came a few hours later.