Hundreds of thousands of people expected to take part in pro-Palestinian protest over weekend; marches to be held across region. Anti-Israel fly-in taking shape

Turbulent weekend in cards? International supporters and hundreds of thousands of participants are expected to take part in the Global March on Jerusalem Friday, as Israel braces for potential attempts to breach the Jewish state's borders.. The event, which is expected to include marches and protests across the region, is entering its final preparations, as IDF forces are also deploying in a bid to prevent any disruptions on Israel's borders.

Organizers of March to Jerusalem vow 'no violence'

The IDF is preparing for the possibility that attempts will be made to breach Israel's borders. The forces have been directed to prevent any beaches of Israeli sovereignty with minimal injuries to the protestors, if they do approach the border.

Sources within the defense establishment have conducted talks with Palestinian security officials to coordinate the events and make sure they remain within the jurisdiction of Palestinian towns.

Sa'id Yakin, one of the protest organizers in the Palestinian Authority, told Ynet that rallies will be held at three West Bank focal points. "We expect thousands of participants," Yakin said. "We have no interest in confrontation, and this march will not give rise to a third Intifada. We hope this move will affect Israel and its government's policy." 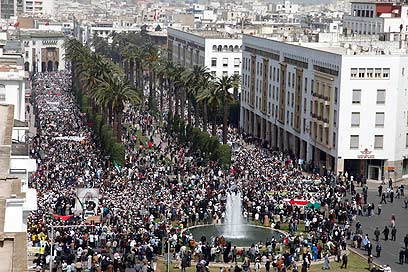 Anti-Israel rally in Morocco (Photo: Reuters)
Palestinian security officials are also preparing for the weekend's events and are estimating that most marchers won't be able to get through local roadblocks and approach Israeli territory. In Lebanon, participants will convene for a prayer session on the Beaufort, which overlooks the border with Israel. Public figures are expected to deliver a speech at the site, with organizers looking forward to welcoming tens of thousands of participants.

According to Lebanese reports, security forces held a Turkish vessel carrying activists from Iran, Turkey and other Asian states for long hours. Hezbollah representatives reportedly mediated in efforts to resolve the crisis.

Jordan has set the gathering point at the site where it is believed that Jesus was baptized, a location overlooking Jerusalem. According to plans, this rally will also include speeches and masses of protestors.

Jordanian coordinator of the march, Ribhi Halloum, said: "We feel the immense interest in the event expressed through donations from private individuals and the Islamic Movement."

The Al-Dustour newspaper reported that Jordanian Prime Minister Awn Shawkat Al-Khasawneh expressed his readiness to provide the Jordanian government's sponsorship to the march which he said would be non-violent.

In Morocco, recent mass marches in Rabat have been seen as the first signs heralding the Jerusalem march events. Plans for the event include a joint forum with students from Jordan and a declaration of a fast day in efforts to show solidarity with Jerusalem.

On Friday, a number of marches will be held simultaneously, leaving from Casablanca, Fes and Meknes. Two days later pro-Palestinian organizations will launch a mass rally in Casablanca expected to attract hundreds of thousands of people.

Syria did not allow the recent riots to interfere with rigorous planning of the events, while in Egypt the activity is set to be low key with just a central rally and a few small protests in the cards.

Meanwhile, the next protest event is waiting just around the corner, and according to assessments will resemble the fly-in that occupied Israel's security forces last summer. A number of pro-Palestinian organizations are expected to take part in the activity, which will take place on April 15 and is described as "challenging the isolation policy Israel is forcing on the West Bank."