Nazem Abu Salim Scapa, an imam from Nazareth, was convicted Sunday on charges of incitement to violence and terror and supporting terror organizations.

The Nazareth Magistrates' Court said Scapa's Friday sermons at the Shihab al-Din mosque in the city inspired two terror cells to attack Jews and Christians. One of the gangs has also been charged with murdering cab driver Efim Weinstein in 2009.

Scapa, 47, has served as the imam of the Shihab al-Din mosque for the past 15 years, but he delivered sermons in other mosques as well – including the al-Aqsa mosque in Jerusalem's Old City. He was arrested in November 2010. 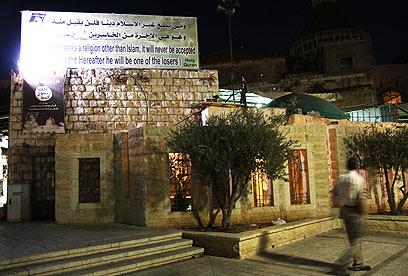 The prosecution said that in 1997 Skafeh established a Salafist-Jihadist group - Ansar Allah Bayit al-Maqdas al-Nasira (Supporters of God - Jerusalem - Nazareth'). The group has as its symbol a globe in the shape of the Dome of the Rock topped by a black flag, a mark also identified with the Taliban as well as with the radical Islamist ideologies of the Salafist movement.

Over the years, the imam distributed posters, booklets and manifestos and created a website, Muslim 48, to spread global jihad's ideology, the indictment said. He also publically endorsed al-Qaeda in his articles and even issued statements on behalf of Osama bin Laden.

In the indictment, the State said a group of worshipers who were exposed to Scapa's sermons adopted a radical Islamist ideology and committed a series of violent crimes against non-Muslims. Another group collected weapons to be used against Israeli soldiers as well as Pope Benedict XVI, who visited Israel in 2009. Other worshippers vowed to support global jihad. Judge Lily Yung-Gefer mentioned that one of Scapa's sermons called for "violent acts of vengeance (beheadings) against those who have dishonored the prophet (Muhammad). This was no abstract call to annihilate the heretics, but a direct call for violence against anyone who dishonors the prophet and Muslims." The judge said the imam's publications encouraged the "highest and most dangerous level" of violence. Scapa urged his followers to "slaughter and fight," according to Yung-Gefer. "His statements constituted a clear call to commit murder." In response to the verdict, Attorney Yael Kochavi of the State Prosecutor's Office said "the court made it clear that freedom of expression also has its limits and convicted an imam who violated the law with his unruly incitement."