New Jersey governor claims visit to Israel unrelated to rumors about him running for US president in 2016; says 'I did not expect to meet Americans from Tennessee, Minnesota, California, and New Jersey'

As New Jersey governor Chris Christie made his way to the Western Wall during an intensive visit to Jerusalem on Monday, he was greeted by an excited group of American tourists and expats who recognized the potential 2012 vice presidential candidate.

When asked what he felt about the warm reception, the governor responded “it’s a little disorienting. I just got here 9 am this morning and did not expect to meet Americans from Tennessee, Minnesota, California, and New Jersey.”

Chants of “2016” could be heard among the crowd, referring to the governor’s potential bid for the next presidential election in four years time.

However, Christie made clear that his visit to Israel had little to do with rumors about him running for US president in 2016. “I’ve come here because this is a momentous and significant place. I’ve always wanted to visit Israel but I’ve never had the opportunity until now.”

Governor Christie also mentioned how special it was for him to be at the Mount of Olives with his 11-year old son: “To be so close to the spot where the Biblical story of Abraham and the binding of Issac took place, and my son by my side was truly a moving moment.”

The Western Wall, a remnant of an ancient wall that surrounded the Second Temple from about 2,000 years ago, is one of Judaism’s most sacred sites. 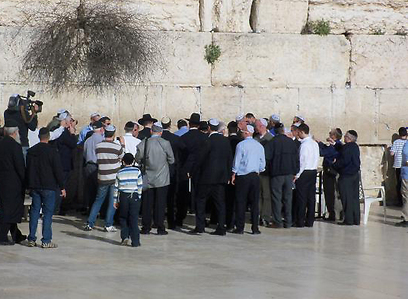 The rabbi of the Western Wall, Shmuel Rabinowitz arrived to especially greet the governor, and the two along with the Christie’s delegation, made their way to the wall to pray. When asked what Christie prayed for at the wall, the governor replied that it was “personal and private” and would not say.

The Western Wall, located in the Old City of Jerusalem, has been visited by many US politicians and world leaders including then-US senator Barak Obama three years ago, Bill and Hillary Clinton, George W. Bush, the Dali Lama and Pope Benedict XVI as well North American celebrities including Justin Bieber and Leonardo DiCaprio. New Jersey in particular has a tradition where its governors visit Israel. “Anyone who tries to implicate that this is a political trip is just putting a spin on the governor’s visit,” says Eric Kaplan, a New Jersey native studying in Israel for the year who came to greet Christie and his family at the wall.

“The governor has many close Jewish friends back in New Jersey and has always cared about the Jewish community and respected Judaism. It’s not surprising to see him here,” added Kaplan.

Past New Jersey governors who have visited Israel include former governors Jon Corzine in 2008 and Christine Whitman in 2000. In 2008, the New Jersey Legislature expressed the state’s strong friendship with Israel by passing a resolution that congratulated Israel on its 60th anniversary of independence from the United Kingdom which also highlighted the state’s vibrant trading relationship with Israel. Israel is one of New Jersey’s top trading partners, with Israel purchasing over $11 billion in goods and services from the Garden State since 1996. The two have also shared millions of dollars in bi-national grants and offer joint support of their respective universities in technological and medical advances. In 2011 alone, New Jersey exports to Israel reached over $ 740 million.

Kaplan, 22, who spent the summer interning in Governor Christie’s office in 2010, got to know the governor during his internship and described him as a “great and cordial guy,” who is “upfront with his support of Israel.”

Christie, donning a yarmulke with Governor Christie embroidered on it - a present from his delegation - was relaxed as he spoke to reporters. When asked if he thought the visit to Israel would boost his presidential credentials, Christie replied, “whether this visit increases or lowers support back in the US is not my priority here today. I came to experience the Holy Land - with my family.”

Christie’s wife and children as well as his father and mother-in law were part of the visiting delegation in what was the governor’s first visit to Israel.

During his trip, billed “Jersey to Jerusalem Trade Mission,” Christie met with Prime Minister Benjamin Netanyahu on Monday, which Christie described as “a good meeting.” The governor said he and the prime minister “shared similar economic approaches.”

On Tuesday, the New Jersey governor visited with President Shimon Peres and will spend the rest of the visit touring the country, visiting a pharmaceutical facility, participating in a business round-table discussion and visiting a school. Later in the week, Christie will visit King Abdullah in Jordan as personal family visit by invitation from the King.

Just before Governor Christie got ready to leave the Western Wall on Monday, a young father rushed over, asking the governor if he would be willing to hold his 6-month year old son, Jack and have a photo taken with him. “Of course, I still remember how to hold one of these,” Christie cradling the blue-eyed baby. Although the father indicated that he couldn’t vote for Christie—because he was Canadian—his wife, an American, informed him she would be happy to vote for Christie in the next election. Anav Silverman is a writer for Tazpit News Agency in Jerusalem. She made aliyah from Maine in 2004.