In love with Israel
Photo: Shutterstock

Why I no longer hate Israel

Op-ed: Portuguese blogger explains why he changed his views, fell in love with Israel

I’m a 22-year-old Portuguese gay activist and PhD student. I’m not Jewish, Israeli or even religious, but I am a Zionist and strong supporter of Israel, and I want to explain why.

My story begins at the age of nine, when I went to the school library to get the Diary of Anne Frank. I had no prior idea about the Holocaust and I could not comprehend such persecution. I had never met a Jew, but I was raised to see other people as similar to myself.

Op-ed: Silence in face of hate

The book’s story haunted me: This girl, slightly older than me, hiding for years, confined, isolated, being persecuted for who she was, constantly fearful of being discovered... How horrible; how could this have happened?

A few months later, I discovered I was gay. I was 10 and in Anne’s attic: Confined, isolated, hiding who I was, fearing what would happen if I was discovered... I felt strongly identified with Anne and the Jewish people, and this feeling never abandoned me.

Shortly after, the second Intifada started. I began seeing Israel, a country which I knew almost nothing about, on the news constantly, for the worst reasons. I learned that the Jews had invaded Palestine after the Holocaust to get a country and were occupying and controlling the native Palestinians who lived in the remaining land. 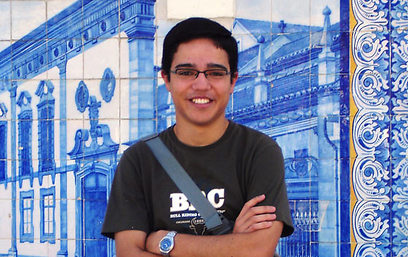 Romeu Monteiro - A Zionist
The TV showed us these people blowing themselves up inside buses and cafes and I, like most people around me, thought: “How desperate must someone be to kill themselves like this? How could the Jews go from being oppressed to oppressors? Have they not learned the lessons of History?” I grew up loving the Jewish people but hating Israel. In 2008, when I was 18 and in college, I found myself criticizing Israel and the Gaza Strip blockade in a YouTube video about the death of Rachel Corrie. I got an answer from an Israeli commenter about my age, who wrote that there was no blockade, as several trucks were crossing into the Strip daily. This greatly confused me and I asked him to present me with his arguments in defense of Israel. I said I would change my mind if they were convincing. He wrote me a long message, telling me about the massacres of Jews in Palestine before Israel existed, the wars of extermination, and the indoctrination for hate of Jews and Israel in the Middle East, among other things, which he compared to several examples of the humanist character of Israel and its society. I read it all and, after verifying the information, I was convinced...

My world shook. I became aware that I was making unfair judgments and spreading hate and false propaganda about Israel... I was sad with myself and I felt angry and betrayed that I had trusted so much in organizations I thought were fighting for peace, equality and against prejudice, like I saw them doing for gay rights. I realized I was being fed ignorance and hate by people who were, at best, as ignorant and prejudiced as those they were "fighting" against while believing themselves to be enlightened individuals and making me believe it too... I read more and more about Israel, and I became fascinated with the amazing story of a people who, against all odds, had managed to survive and remain united through centuries of persecution, fight for their homeland, rebuild their country and revive their language - just like a phoenix rising from the ashes, striving for freedom and peace. I realized Israel is a democratic, tolerant, multi-ethnic, multi-religious, rapidly developing nation. A place I could live in free and more accepted than in my home country, and the only place I could safely set foot at in the Middle East. I found myself in love with Israel, something I never thought I would do and never really want to be. In 2010, there was the flotilla incident. Suddenly, all media were reporting about Israel. The news reports were grossly distorted and I knew I had to do something. I found myself arguing about it with professors at the university and I started sharing videos of the IDF through my Facebook account. I thought I would be risking much socially, but I knew it was a matter of justice, as someone had to tell the truth and not allow Israel to be demonized with no right to defense once again. After the flotilla I kept posting pro-Israel stuff, and had serious and even ugly discussions about this issue with several people. Each discussion revealed more ignorance and double-standards and made me a stronger Zionist and supporter of Israel and its people. I thought I was the only one defending Israel but I gradually discovered other people doing it. Once, a friend whispered in my ear: “I am also more on the side of Israel... but, please, don’t tell anyone!” She was scared to voice her opinion, and this reinforced my conviction that I had to be vocal about my defense of Israel; I was speaking for many people who were afraid to do it. At the end it’s a matter of justice. If there’s a people that fights for its right to self-determination and to live in peace, I will be on their side. If there’s a group that is demonized by prejudice and ignorance, I will fight prejudice and ignorance with them. If there’s a culture whose main values include tolerance for different sexual orientations, races and religions - clashing with another one that educates for intolerance and hate - I know which side I'll support. I am a Zionist and I support the right of the Jewish people to self-rule and to life in peace, like I believe every thinking human being should.

Romeu Monteiro is an electric engineering Phd student at Carnegie Mellon University. You can see his blog here

Pro-Israel bloggers are welcome to send op-eds to opinions@y-i.co.il