Rabbi Binyomin Jacobs, Chief Rabbi of the Inter-Provincial Rabbinate in Holland and member made Officer of Order of Orange-Nassau

Rabbi Binyomin Jacobs, Chief Rabbi of the Inter-Provincial Chief Rabbinate in Holland and member of the Rabbinical Center of Europe, was made an Officer of the Order of Orange-Nassau on Friday. The order is one of the highest civilian awards given by the Queen of Holland.

The honor is usually given to princes of other royal families in Europe, diplomats, artists, and social activists. It is the first time in the history of the Dutch Jewish community where a rabbi has received this honor.

Rabbi Binyomin Jacobs, 62, was born in Holland and has served there as a rabbi for over 30 years. The award was given to him for his activities in building bridges in Dutch society, especially for his interfaith and inter-communal work. 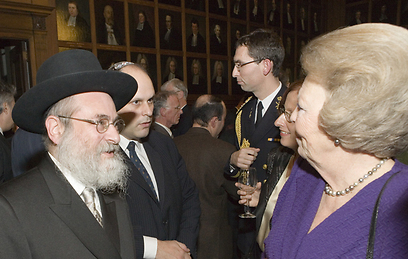 As well as his position as rabbi of the Sinai Medical Center in Amtelveen, his activities on behalf of the Jewish community as the Chief Rabbi of the Inter-Provincial Chief Rabbinate and for his activities on behalf of European Jewry as a prominent member of the Rabbinical Center of Europe (RCE), Brussels-based organization representing over 700 European religious leaders and dedicated to meeting the needs of Jewish communities in Europe.

Thanks to these and many other activities, Rabbi Jacobs is a well known personality in Holland and is a highly sought after lecturer and interviewee in the Dutch media. Rabbi Jacobs was at the forefront of the battle which successfully cancelled a proposed law that would have banned shechitah, Jewish religious slaughter.

Dr. Benoit Wesly, Chairman of the Dutch Jewish community of Limburg and Honorary Consul of Israel to the Netherlands, was one of the people who recommended Rabbi Jacobs for the award.

Commenting on Rabbi Jacobs' award Dr. Wesly said: “This is an important day for Jews in this part of the world,” Dr. Wesly said. “The award given to Rabbi Jacobs is an honor for all the Jews in Holland. It gives our community great pride and we thank God and congratulate Rabbi Jacobs and his wife on this great honor."

Rabbi Arye Goldberg, Deputy Director of the RCE, also spoke about his pride upon hearing news of the award. “This award is a true recognition of the important work of Rabbi Jacobs, not just amongst the Jewish community in Holland, but in Dutch society in general,” Rabbi Goldberg said.

“In addition, as a prominent member of the Rabbinical Center of Europe, Rabbi Jacobs helps us facilitate Jewish life across the European continent.”

“This type of award demonstrates that the rabbis of the RCE are doing an excellent job of not just working in the communities but also of representing Jewish causes to European authorities and officials.”

The Order of Orange Nassau was established 120 years ago and given by the Queen of the Netherlands. The award is given every year on birthday of Queen Beatrix. It is given by her representatives to people all over Holland.

The Order of Orange-Nassau is a chivalry order open to "everyone who has earned special merits in society". These are people who deserve appreciation and recognition from society for the special way in which they have carried out their activities. The order is comparable with the Order of the British Empire in the UK.