'You showed us true meaning of commitment to state, family,' PM says in eulogy

Prof. Netanyahu, who died earlier in the day at the age of 102, was a renowned historian, specializing in the golden age of Jewish history in Spain, and a professor emeritus at Cornell University.

In 1944, Netanyahu married Tzila Segal and the couple had three sons: Yonatan, born in 1946, a former commander of Sayeret Matkal, who was killed in 1976 during Operation Entebbe; Benjamin, born 1949 and Iddo, born 1952, a physician, author and playwright. 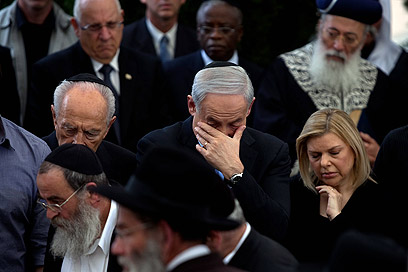 "You father, never hesitated to face the trials that had befallen the Jewish nation and contribute to the nation's defense. Two years ago, when you turned 100, I had the privilege (…) of telling you, while you were alive, how much I love you, how much I adore you. Dear father, how can I describe all that you have given Yoni, Iddo and me?" the prime minister said in his eulogy. 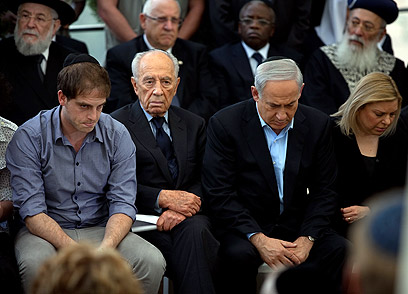 The PM said his father had shown him what commitment was, both to the state and to family, and also contributed to the establishment of the Jewish state. The PM mentioned that his father traveled to London to persuade Jabotinsky to relocate to the United States and from there mobilize support for the Jewish state.

"Jabotinsky died shortly after you arrived in the US, but you did not lose hope and approached dozens of senators, congressman and American leaders such as (Dwight D.) Eisenhower. You told them that the Jewish state would be established and that it would not be defeated by the Arabs," the PM said.

Prime Minister Netanyahu then addressed his late father, saying: "Years before Herzl's predictions were realized you understood that he was right. When you were 27 you wrote that Herzl saw the catastrophe and the looming destruction of the nation. You wrote that a few years before the Second World War and the Holocaust.

Not only did you agree with Herzl over the dangers in store, you worked to keep it at bay and contributed to the foundation of the State of Israel.

Benjamin Netanyahu also mentioned the hardships his parents faced after his brother Yoni was killed in Entebbe. "Your foresight led you, 35 years ago, after Yoni was killed, to focus an international intellectual effort against global terror. You said that the thing standing behind terror was policy and then terror could be vanquished.

"Father, those attributes, of foresight, and others, I could not understand as a little boy growing up in the 50s. Slowly, slowly, things became clear to me and to Iddo as we grew older."

Netanyahu expressed the admiration he had for his parents and the way they lived their lives after his brother's death. "You carried, both of you, your grief with grace. I don't know where you found the strength to go on living with your sorrow."

The prime minister then said: "Father, on this day that I say goodbye to you, I wish to tell you the same words that Yoni wrote to you 46 years ago: I have never told you how proud I am that you are the person you are and that I am your son."

President Shimon Peres said during the funeral: "We have lost a great teacher who left behind a leader for his people."

Peres then turned to the prime minister and said: "Bibi, your father wrote about history and you are making it with the same perception and heritage. I know that your heart is broken but your spirit is strong."