Gilad Shalit attended a concert held by well known Israeli singer Shlomo Artzi in Caesarea Wednesday evening. The two sang Artzi's song “Melech Ha’olam” (King of the world), which was the singer's signature song for the release of the Israeli soldier during his five years in Hamas captivity.

Artzi, who was a prominent supporter of the campaign to release the soldier, often dedicated the song “Yoter Mizeh Anahnu Lo Tzrichim” (We don’t need anything more than this) to Shalit during his years in captivity.
Tour de Shalit
Gilad Shalit to lead Cycling for Peace outing
Goel Beno
Last year's event was dedicated to captive soldier's release; this year, he will take part in it
Gilad Shalit to lead Cycling for Peace outing
During his concerts, Artzi would pray for Shalit's speedy return from captivity while a picture of the captive soldier was displayed in the background.

In the summer of 2010, during an event held in show of support for Shalit's release, Artzi told Gilad Shalit's father, Noam Shalit, that he had had a vision of Gilad at one of his concerts in Caesarea. "He will come back," Artzi told the father. 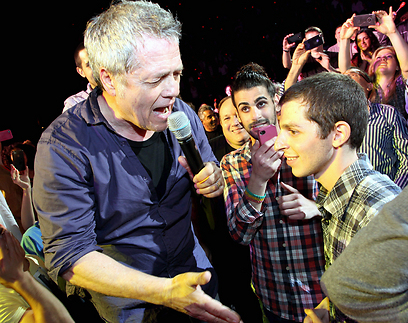 Artzi's vision came to life on Wednesday, when Shalit came to his opening concert  accompanied by several of his friends. Over 3,800 people received Shalit with applause as the former soldier took his seat, Yedioth Ahronoth reported.

During the concert, Artzi told the crowd of the emotional bond he had formed with the Shalit family during the five years of Gilad's captivity. He further spoke of his contribution to the campaign for his release.

Artzi then dedicated the song “Melech Ha’olam” to Shalit, leaving not one dry eye in the house. The singer told Shalit that he sang the song during an event held in his honor on the border with Gaza in the hope that the captured soldier would hear the music.

Shalit, who was evidently moved, thanked Artzi and joined in singing the song. Artzi asked Shalit to "sing, dance and have fun."