Op-ed: Our foes have no answer for Israel's submarines, which guarantee regional stability

Quietly, underwater, Israel is turning into a maritime power like the United States and Russia, with an armada of advanced submarines. Germany recently agreed to provide Israel with a sixth Dolphin submarine; the Jewish state already has three. Two more will be arriving this and next year, and then the sixth one will come.

Germany also agreed to subsidize the sixth submarine, as it did with the previous ones. The first two were given to Israel for free; the Germans paid for half of the third one, and will pay for one third of the next three. In an era where the Germans are cutting back their own military because of economic hardship, this is not a trivial matter.

Germany may later sell Israel more advanced submarines of this type, and Israel is indeed interested in building a fleet of 10 submarines, which will secure its power for dozens of years to come. The cost of every submarine is some $500M dollars, but the price may rise to $850M. Israel presented special demands for its subs and installed advanced, secret systems in them. The sixth submarine will be the most advanced and capable of staying underwater the longest. 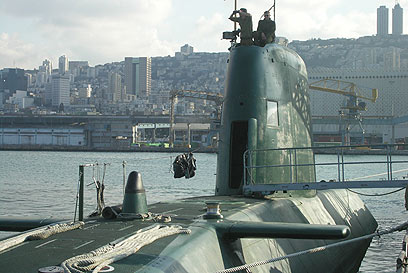 IDF submarine in Haifa (Photo: IDF Spokesman's Office)
The IDF's Navy is undergoing a significant conceptual change: From serving as a border guard (which is also an important duty,) it's shifting into Israel's and the IDF's strategic arm, no less so than the Air Force. Our submarines can reach any area of the world, and most certainly in this region, and our enemies do not have a reasonable response for the time being.

No regional state can afford to purchase such weapons. A few years ago it was reported that the Egyptians were also interested in acquiring Dolphin submarines from Germany. Egypt's subs are outdated, and Cairo became anxious because of Israel's dominance in deep water, which the Egyptians have no response for. However, negotiations did not advance, and today Cairo's military regime has no money for such subs. Meanwhile, the Iranians are monitoring with concern the German reports about the provision of three more subs to Israel, knowing Tehran has no response for this either. In order to show they possess an alternative, Iran's outdated subs have been recently traveling to the Red Sea as provocation vis-à-vis the long-range Israeli presence. This is also the reason why an Iranian vessel recently crossed through the Suez Cannel en route to the Mediterranean: In order to show that Iran is a superpower after all. Sun Tzu, who wrote The Art of War, already taught us how to produce deterrence: If the enemy estimates that it will suffer grave damage should it attack you, it will curb itself. And this is the significance of the submarines: Iran could theoretically strike Israel with missiles, yet it knows, according to foreign reports, that Tehran may pay an existential price. Even if Israel's offensive and defensive capabilities are destroyed, the blow against Iran shall arrive from the sea – and it will most certainly arrive. If Iran realizes that it will have to pay a terrible price, it won't attack. And indeed, global media outlets are reporting that an Israeli submarine constantly sails near Iran's shores. This is deterrence. Once Israel will possess six submarines, and possible more, it will signify Israeli control over a huge area.

While submarines are a powerful weapon of war, Israel's subs are in fact the surest guarantee for maintaining Mideastern stability and order. The subs guarantee that the risk of war will decline, rather than grow. With such power, Israel is the guardian of the sea and of stability in our region, and this is the best investment in regional peace.