Gaining access to a key Iranian military facility will be the priority for the UN nuclear watchdog when it resumes talks with the Islamic state in mid-May, agency head Yukiya Amano said on Friday.

Amano, director general of the International Atomic Energy Agency (IAEA), said the Vienna-based UN body did not yet have a "positive response" from Iran regarding the request for nuclear inspectors to be allowed to visit the Parchin site.

But he told journalists on the sidelines of a conference in the Swiss town of St Gallen, "we would like to pursue this" issue of Parchin, where the IAEA believes nuclear-related military research may have taken place. Iran denies this.

"We need to look at all the outstanding issues, but Parchin is the priority and we should start with that," Amano said. Western diplomats say Iran appears to be stonewalling the IAEA's request to go to Parchin and they suspect it may be "sanitizing" the site southeast of Tehran of any incriminating evidence before any visit, a suspicion Tehran dismisses. 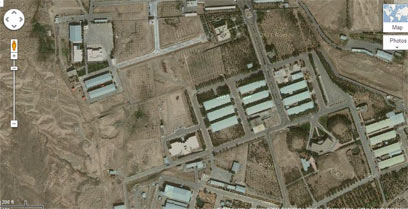 Amano has said the agency has noticed some "activities" at Parchin - a choice of words that Western diplomats interpret as suggesting the IAEA also harbors suspicions of possible clean-up work, on the basis of satellite images at its disposal.

Asked what he meant by "activities", Amano said on Friday: "We do not have people there so we cannot tell what these activities are." Iran and the IAEA will meet for two days of talks in Vienna on May 14-15, just over a week before the Islamic Republic and world powers are to hold a second round of broader political negotiations in Baghdad on May 23. "In my reading the desire to resolve this Iranian issue through dialogue is stronger now than before," Amano told the conference, referring to the resumption of diplomacy between Iran and the powers in Istanbul last month after a gap of more than a year of escalating tension. "Recently we have witnessed a positive atmosphere but we need to have concrete results," he later told reporters. In its talks with Tehran, the IAEA wants Iran to address questions raised in a report it issued last November detailing what it said were suspected Iranian research and development activities relevant to making nuclear weapons. Iran has dismissed the allegations as fabricated. Two meetings in Tehran earlier this year between the IAEA and Iran failed to make any notable progress, especially regarding Parchin, which Iran says is a conventional military site without any links to the nuclear program. Iran has suggested it will only consider the Parchin request once a broader framework has been agreed on how to address questions by the IAEA over the UN agency's suspicions of possible military dimensions to Iran's nuclear activities. The West says Iran's nuclear work is a cover for developing atomic bombs and wants verifiable assurances to the contrary from Tehran - for example, by accepting much more intrusive UN nuclear inspections and limiting its enrichment capacity. Iran denies having a weapons agenda, saying it is enriching uranium solely for peaceful energy purposes. Refined uranium can be used to fuel nuclear power plants, which is Iran's stated aim, or provide the core for a bomb if processed more. Iran, a major oil producer, has repeatedly rejected UN Security Council demands to suspend all its enrichment, which can have both civilian and military purposes. Amano said: "We are sure that they are continuing the enrichment. We haven't heard that they have suspended or stopped - they are continuing."