Scene of the gunfight
Photo courtesy of the police

Shootout in broad daylight: One man was killed and another wounded Wednesday during a gunfight between the special police forces and members of the Abd al-Kader crime family in Tayibe, an Arab city east of Kfar Saba.

According to police, the officers were conducting an operation when they came across local gunmen.

The ensuing gunfight, which took place near a local school, prompted large numbers of police and emergency personnel to be scrambled to the area.

A local resident told Ynet that many businesses in the area closed their doors and left "out of fear."

"Many shots were heard; this caused a scare, people ran away from their homes…," he said. "Our daughter is in kindergarten and we can't reach her. We don't know what to do."

"Masked police officers are walking the streets and are scaring us and the children," another resident said. "We are begging them to let us reach school and pick up our children…what's happening here is incredibly scary." 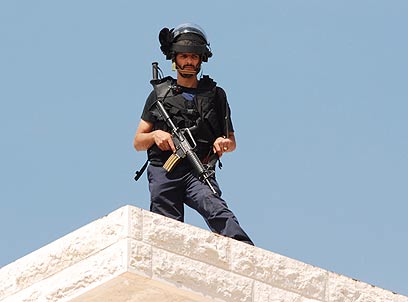 Police deployed across city (Photo: George Ginsburg)
Tayibe residents were conflicted over the incident: "The police have to leave Tayibe immediately so things can calm down," one resident told Ynet. "Their presence provokes the clan and causes panic."

"We're afraid. The whole city is a mess. Half of it is closed, there are gunfights. The streets are not safe," another one said.

Last month police arrested five members of the Abd al-Kader family during a raid on the family compound. They were arrested for threatening police officials after security cameras and barriers placed by the clan were removed from the compound.

For several weeks police repeatedly removed the barriers but the Abd al-Kaders reinstalled them. Tayibe residents said that when police operations are over the barriers and cameras will most likely return.

Residents told Ynet that no one dared to cross the neighborhood which has become the Abd al-Kader compound. According to the residents, anyone who goes near the neighborhood where the Abd al-Kaders reside is forced to undergo an unrelenting interrogation over his actions. Internal Security Minister Yitzhak Aharonovitch visited the city in March and met with the clan's leader. Details of the meeting, which was described as "very brief," were not given. Hassan Shaalan contributed to this report