Supermodel Naomi Campbell celebrated her 42nd birthday on Tuesday with a trip to the birthplace of Jesus, wishing for "good vibrations, not destruction" in the troubled Middle East.

Campbell, wearing a white shirt and black sunglasses, was flanked by Palestinian guards and her own private security detail as she toured the biblical town of Bethlehem.

She lit candles in the Church of the Nativity in Bethlehem, said Palestinian security officials. The church is built on the spot where Christians believe Jesus was born.

"As much traveling as I've done, I've never come here," Campbell told a Palestinian television station. The supermodel said she hoped for peace. "I'm happy to be here. Weapons and war, greed and oil ... I hope it all stops. I care about health, about good vibrations, not destruction," she told the station. 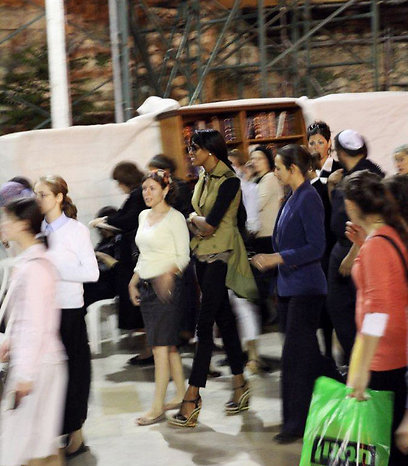 Later, Campbell celebrated her birthday at the nearby Casa Nova Palace Restaurant. Her group ate a traditional Palestinian meal of lamb and rice inside the restaurant, said an employee. She requested anonymity because Palestinian officials threatened to punish people speaking to reporters.

Outside, a small, shaggy black dog whom the employees called "shekel," the name of Israel's currency, barked at mustachioed plainclothes Palestinian security officials sitting at tables.

After the meal, her entourage sped away in a line of black sedans.

Campbell also visited the Western Wall in the Old City of Jerusalem, the holiest place where Jews can pray, a retaining wall of the compound where the Jewish biblical temples stood 2,000 years ago.

Campbell's visit to Bethlehem initially sparked rumors that she was going to marry her longtime boyfriend, Russian billionaire Vladislav Doronin, because she left her Jerusalem hotel wearing a white dress.

Campbell's publicist did not respond to requests for comment. Doronin's firm, Capital Group, could not be reached.