The Kfar Saba Magistrate's Court on Monday extended by 10 days the remand of a CEO in the high-tech sector who is suspected of sexually harassing hundreds of young girls online.

The man allegedly corresponded with the girls online and convinced them to undress and commit sexual acts.

According to the Israel Police's representative at the court hearing, the man also tried to extort one of the girls, who testified that he had threatened to hurt her if she refused to cooperate.

During the hearing it was revealed that dozens of girls have testified about their relationship with the suspect, a 40-year-old resident of the Sharon region in central Israel. The man admitted to the allegations, and reportedly told interrogators, "I don't trust myself. I can repeat the acts."

The court has issued a gag order over the suspect's identity.

During the hearing the police representative submitted images of a sexual nature that were downloaded from the suspect's computer, adding that additional evidence found on the computer led investigators to more alleged victims. 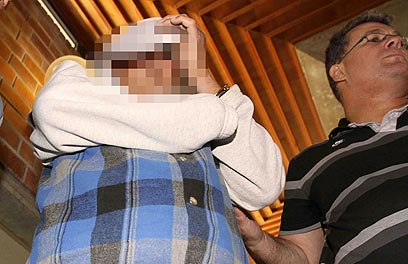 'I don't trust myself.' Suspect in custody (Photo: Ido Erez)

The suspect's attorney told the court that during the years in which his client allegedly chatted with underage girls he had never met with them and did not try to contact them over the phone. The lawyer said his client has no criminal record and asked the court to release him to house arrest.

The man was arrested on suspicion of sexually harassing hundreds of young children aged 10-13 online over the past four years. The suspect, who is known to the police as a pedophile, confessed to the acts during an interrogation, and claimed that he has a problem that must be treated. Pedophilic material was also uncovered on his computer. The suspect, a father of three, allegedly built up a network of false identities, entered social chat rooms and pretended to be a young girl in order to connect with young children.

During his conversation with the underage children, the suspect convinced them to send him photos of themselves naked and perform indecent acts. The police further suspect that the man convinced the children to have virtual sex with him.

Authorities were alerted to the suspect's online activities following a complaint that was filed with the police. With the help of a special Interpol unit which specializes in locating pedophiles, the suspect was caught.

The suspect's computer revealed a messenger program with over one thousand underage contacts on it.

The suspect was arrested at his work place at a high-tech company. Following his arrest, he tried to commit suicide, but police officers managed to prevent him from taking his life. He was then taken for psychiatric evaluation where it was determined that he is dangerous to himself.