In move coordinated with at least seven other Western countries following Houla massacre, State Department says Syrian charge d'affaires would be given 72 hours to leave

The State Department is expelling Syria's top diplomat in Washington following a wave of deadly attacks on civilians in Syria over the weekend, a US official said on Tuesday.

The official, who spoke on condition of anonymity, said the Syrian charge d'affaires would be given 72 hours to leave the country.

Syria's longtime ambassador to Washington, Imad Moustapha, was recalled late last year and a formal replacement has not been named, leaving the charge d'affaires as Damascus' top representative in the United States.

The US move was coordinated with at least seven other Western countries – Britain, France, Germany, Italy, Spain, Canada and Australia - which also expelled Syria's ambassadors from their capitals on Tuesday in response to the coordinated killing of more than 100 civilians in the Syrian town of Houla. 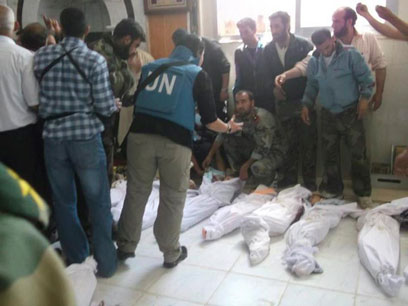 Bodies of some of the children massacred in Houla. (Photo: Reuters)

The joint action marked a new phase in the international effort to halt the repression of a 14-month uprising against Syrian President Bashar al-Assad and force him to relinquish power.

The United States in February closed its embassy in Damascus, withdrawing Ambassador Robert Ford and all US diplomatic personnel due to the worsening security situation in the country.

The step stopped short of severing diplomatic relations, however, and Ford and his team continue to work on Syria from Washington, seeking to maintain contact both with government officials and opposition activists.

The Syrian embassy in Washington was accused of threatening Syrian opposition elements operating out of the US.

Washington has already imposed tough sanctions on Damascus, but has been struggling to craft a more muscular international response to the crisis amid opposition from Russia and China, both permanent members of the UN Security Council.

Bulgaria is also expelling Syria's charge d'affaires as part of the international response to the Houla massacre, its Foreign Ministry said on Tuesday.

"Salah Soukkar will be informed today that he has to leave Bulgaria in the next 72 hours," the ministry said in a statement.

Two other diplomats at the Syrian embassy will also be expelled and the European Union member also decided to temporarily close its mission in Damascus and call back its diplomats, the ministry said.