'I couldn’t imagine raising my kids anywhere else,' says one of West Bank community's founders. 'Who are these leftist organizations to dictate to us where our homes should be?'

A group of young children parade in a circle, waving Israeli flags against the clear blue sky. They are directed by several youth leaders who are trying to keep the kids in line. It is a few days before Israel’s Independence Day and Migron is preparing for the upcoming festive ceremony, held for the entire community.

Some of the mothers come out to watch their children perform. Among them, stands Aviela Deitch, originally from Milwaukee, Wisconsin, who has been living for the past year in Migron, a tiny West Bank community of 49 families, located 14 miles north of Jerusalem. She lives in a small mobile home, with her husband and six children in a community considered "illegal" and "unauthorized," and even marked as a "wildcat outpost" by those who oppose its existence and subsequently described as such in much of the international press.

For Aviela, the terminology does not matter.

"We chose to live here because we wanted our children to know the responsibility of building a community in a place that has wonderful people," she explains to Tazpit News Agency.

"There is a certain quality of life in Migron and a very strong sense of community. The youth are bright and polite and their parents are involved. Our children attend great schools in nearby communities, while the younger ones go to Migron’s community daycare and kindergarten. There is almost a zero- percent crime rate." 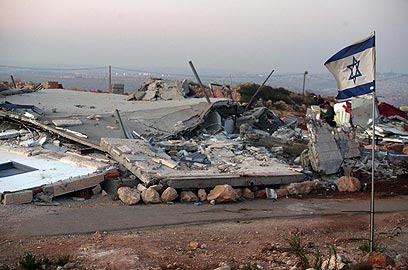 Migron after eviction (Photo: Gil Yohanan)
Established in 1999, Migron is made up of mostly young professional people who served in the IDF and national service, graduated from universities, with many now working primarily in the fields of social work, special education, rehabilitation, elderly care, computer programming and mechanical engineering.

Until 2006, residents in Migron lived quietly, certain that their children would continue to flourish in a safe and happy environment embodied by the values of their community.

"I couldn’t imagine raising my kids anywhere else," says Itay Harel, one of Migron’s founders who established the community 13 years ago.

But when Peace Now claimed that Migron was settled on privately owned Palestinian land, an unexpected battle began.

"Who are these organizations to dictate to us where our homes should be?" asks Harel. "We received the proper authorization to establish this community over a decade ago."

Migron residents claim that the Palestinians who "owned" the land were not even aware of this until Peace Now instigated the petition on behalf of the Palestinian land owners. In an unprecedented ruling in August 2011, Israel’s Supreme Court ruled in favor of Peace Now’s attorney and ordered the government to evict the settlers. The evacuation and dismantling of Migron is scheduled to take place this summer in August. However, Itay Harel, one of Migron’s founders says that the land was barren when he first arrived. "No Arabs were even living in this area. There was nothing here when we came to set up this community, which was one reason why we chose build here in the first place,” he says, pointing out the rocky landscape.

Harel runs a horseback-riding therapy clinic with his wife for youth at risk. "Our clinic currently caters to 80 children from across the country, many of whom come from broken homes and could not fit in a traditional school system, have abused drugs and alcohol, as well as the physically-challenged. They are given necessary life-tools and skills through the therapeutic experience of learning to ride and maneuver horses."

An idealistic 38-year-old husband and father who studied social work at Hebrew University, Harel speaks at length about the Migron community with warmth. “I helped found Migron with the idea that it would serve as pillar for troubled youth.” Come this August, Harel does not want to think about losing the home and the community that he has worked over a decade to build. "We’ve worked so hard this past year to get the government to postpone the court’s decision. Every week I’ve visited the Knesset to try and ensure that Migron would continue."

Battle with the press

Migron residents feel that the battle is not only with the government and courts but also with the press, both in Israel and internationally. Many feel they have been portrayed unfairly in the media.

"At the end of the day, I do my grocery shopping with Palestinians, I live alongside of them, and I never have any problems. No one wants a fight here,”another resident says “But that’s not what you usually read about us in the news." "Sometimes reporters come with pre-conceived notions about our community and it’s difficult to change that. I’ve found that my words have been altered completely in some news pieces and that’s also frustrating."

Deitch has "only one message" to the world: "I want to live in Migron so that I can raise my kids in this wonderful community. This is my home and I should have every right to do so."

Anav Silverman is a writer for Tazpit News Agency in Jerusalem