Students from Haifa, Ein Mahal perform 'Step By Step Sauwa Sauwa' as part of Friends Forever Program. 'If we can coexist on the same stage, we can coexist in the same country,' one of them says

Students from the pluralistic Leo Baeck Education Center in Haifa and students from the Arab village of Ein Mahal in the Lower Galilee will perform together in an original musical production inspired by the Friends Forever Program, Yedioth Ahronoth reported this week.

The Arab-Jewish musical “Step By Step Sauwa Sauwa,” which is based on he Broadway show A Chorus Line, is performed in Hebrew, English and Arabic and takes place in an "ideal Israel," where Jews and Arabs live together in peace.
Coexistence
Arab-Jewish hockey team breaks barriers
Associated Press
'When you play together, you forget the players are Arab and Jewish, says Druze who plays on Metulla team. Jewish teen: This country isn’t ours alone
Arab-Jewish hockey team breaks barriers
Dany Fesler, chief executive of the Leo Baeck Center, told the Jewish Chronicle that the students had originally gone on a trip to the US through the Friends Forever Program scheme, which pairs up teens from conflict zones.

"They went to New Hampshire, lived in the same house, cooked together, went hiking, volunteering and gave talks about their experiences. They came back totally different. They wanted to keep their friendships going, and do a project together," he said.

Now, he says, "they are creating something onstage to describe the conflict, to show the differences and how we are bridging them. It's changing their lives. They influence their families, their peers and everyone is asking about it. It's wonderful to see." 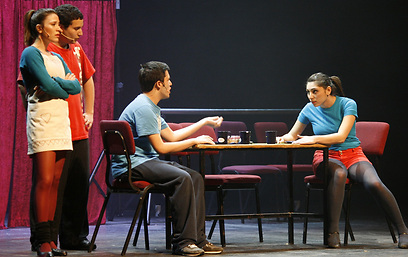 Fesler told the Jewish Chronicle that the students' own concerns and prejudices could be heard in the dialogue: "We hear their own fears coming out in what they have written, fears about terrorism, bombings, fears about the IDF, and being a minority."

that people can coexist without fighting."

The musical was even brought to stages in London and Switzerland and, according to Fesler, was "received very warmly."