Some 200 detained throughout West Bank during raids conducted in response to high-profile vigilante shootings. Jenin governor: Rules have changed

Palestinian President Mahmoud Abbas has launched his broadest weapons crackdown in years, for the first time confronting his own loyalists, including rogue security officers and gunmen linked to his Fatah movement.

The arrest raids conducted in recent weeks are a response to high-profile vigilante shootings that threatened to undermine law-and-order successes, seen as key to Palestinian statehood claims.

Some 200 people were detained and dozens of guns seized in recent weeks, many in the northern West Bank district of Jenin, Palestinian police said Monday.

Just under half the detainees were released after surrendering their weapons, while others remain in custody on suspicion of weapons dealing, extortion and shooting attacks, said police spokesman Adnan Damiri. Until the crackdown, Abbas had largely avoided taking on armed men with ties to Fatah, apparently fearing a political backlash and unrest in the ranks. The recent shootings, including a May attack on the house of the Jenin district governor, who later died of a heart attack, seem to have left him no choice. Among those arrested were several gangs involved in illegal weapons trading and extortion, as well as those who attacked the house of the Jenin governor. The Palestinian officials have linked the deadly heart attack to the shooting, seen as the main trigger for the security crackdown. At the same time, Palestinian human rights groups have criticized Abbas for curtailing basic freedoms in the West Bank under the guise of security. Over the weekend, his security forces violently dispersed two protests against Abbas' security coordination with Israel and a planned meeting with Israeli Vice Premier Shaul Mofaz. The meeting was later postponed. 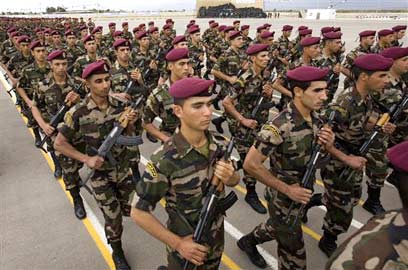 Officers and plainclothes agents scuffled with dozens of young demonstrators, and kicked and beat several of them.

To the international community, the Jenin area, a former terrorist stronghold, had become a symbol of Abbas' ability to assert control successfully. The recent violence has threatened to spoil that perception. The situation "reached a level where it was hurting the faction (Fatah) and the reputation of the security forces, and the president decided to intervene," said Azmi Shuaibi, an independent Palestinian lawmaker. Senior Fatah officials did not criticize the crackdown publicly, though local leaders in the Jenin district argued that disarming Fatah loyalists will leave them vulnerable in case of renewed clashes with the movement's main political rival, the Islamic Hamas terror organization. Five years ago, Hamas and Fatah fought a brief civil war in the Gaza Strip, ending with a Hamas takeover of Gaza that left Abbas with only the West Bank. Even Fatah lawmaker Shami al-Shami, who was shot and wounded in an ambush outside his home in the Jenin refugee camp over the weekend, opposes a large-scale weapons roundup, saying only troublemakers should be targeted. "If the Palestinian Authority takes my weapon from me, and tomorrow the Authority cannot protect me, Hamas people will come and attack me," said al-Shami, his wounded right leg propped up on a pillow as he received well-wishers in his brother's living room. There were no suspects in the attack on al-Shami, a former Palestinian security official, said the new district governor, Talal Dweikat. The Jenin district is the largest contiguous area under Palestinian self-rule. Israel retains overall control of the West Bank, an area it captured in 1967, along with the Gaza Strip and east Jerusalem. Palestinians have limited autonomy in 38% of the West Bank. Since the 2007 Hamas takeover of Gaza, Abbas has gradually asserted control in the self-rule areas, clamping down on Hamas while trying to co-opt Fatah-linked gunmen who had fought Israeli troops during a Palestinian uprising a decade ago. Some of the armed Fatah loyalists were given security jobs, while others were persuaded to disband their squads. The performance of Abbas' security forces, key to buttressing Palestinian claims for independence, has won Israeli praise in recent years. At the same time, Palestinian officials complain that Israeli restrictions on the movement of the Palestinian security forces and frequent Israeli army incursions into self-rule areas hamper their efforts. In Jenin, the equilibrium seemed to hold for a while, but several shootings attracted new attention to the once troubled district. In April 2011, a masked gunman shot and killed well-known Israeli actor Juliano Mer Khamis, son of a Jewish mother and a Palestinian father, who had founded a community theater in the Jenin camp to provide a means of peaceful protest against Israeli occupation. In a brazen daytime attack, the killer stopped the actor's car near the theater, fired several shots and escaped. A "no weapons allowed" sign still marks the entrance to the Freedom Theater, but the admonition clearly never applied to the rest of the Jenin camp, the epicenter of what Damiri said was the most extensive weapons crackdown since 2007. Among the high-profile detainees is Zakarya Zubeidi, the most famous gunman in the Jenin camp. Zubeidi was arrested after the attack on the governor, though security officials would not say if he was a suspect. Dweikat, the new governor, said rules have changed in his district. "Those who enter the circle of chaos" will not be able to hide behind their rank or political affiliation, he said.