Libyans began voting in their first free national election in 60 years on Saturday, a poll designed to shake off the legacy of Muammar Gaddafi but which risks being hijacked by autonomy demands in the east and unrest in the desert south.

Voters will choose a 200-member assembly which will elect a prime minister and cabinet before laying the ground for full parliamentary elections next year under a new constitution. Saturday's elections are being held amid intense regional rivalries, fears of violence and calls for a boycott.

Candidates with Islamic agendas dominate the field of more than 3,700 hopefuls, suggesting Libya will be the next "Arab Spring" country after Egypt and Tunisia to see religious parties secure footholds in power after last year's uprisings.

But the credibility of the vote could be wrecked if armed militia with regional or tribal loyalties discourage voters from turning out, or if disputes over the outcome degenerate into pitched battles between rival factions. 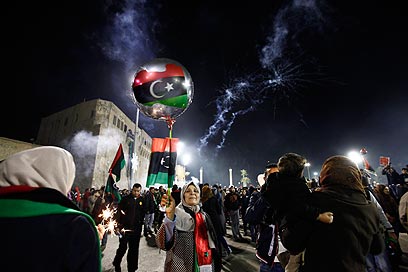 Libyans celebrated one year to revolution in February (Photo: Reuters)

Inside a school being used as a polling station in central Tripoli, a few dozen women queued. Some carried the new Libyan flag on their backs or wore jewelry in its red, green and black colors. Some had tears in their eyes.

"I am a Libyan citizen in free Libya," said Mahmud Mohammed Al-Bizamti, outside the polling station.

"I came today to be able to vote in a democratic way. Today is like a wedding for us," he said.

The greatest threat comes from the eastern region around the city of Benghazi, cradle of the NATO-backed  nearly a year ago but which complains of neglect by the interim government in Tripoli in the west.

"There is no doubt there could be a civil war between us in the east and the west," Hamed al-Hassi, a former rebel who now heads the High Military Council of Cyrenaica, the name of the eastern region, told Reuters. "The country will be in a state of paralysis because no one in the government is listening to us."

On Friday, local armed groups shut off half the North African country's oil exports to press their demands for greater representation in the new national assembly. At least three major oil exporting terminals were affected.

"The strikes will continue for 48 hours if the government does not respond positively to their requests," said a note to oil companies from shipping agents.

Hundreds of demonstrators gathered in a square in central Benghazi late on Friday, saying they would boycott the vote in protest at the fact that the east had been allotted only 60 seats in the assembly compared to 102 for the west. 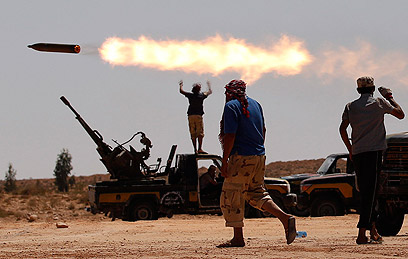 In the latest attack on election authorities in the east, a helicopter carrying voting material had to make an emergency landing near Benghazi on Friday after being struck by anti-aircraft fire. One person on board was killed.

Concerns exist elsewhere. In the isolated southern area of Kufra in the Saharan desert, tribal clashes are so fierce that election observers will be unable to visit, and some question whether the vote can proceed in certain areas there.

Brotherhood set to do well

While analysts say it is hard to predict the political make-up of the new assembly, parties and candidates professing an attachment to Islamic values dominate and very few are running on an exclusively secular ticket.

The Justice and Construction offshoot of Libya's Muslim Brotherhood is tipped to do well, as is al-Watan, the party of former CIA detainee and Islamist insurgent Abdel Hakim Belhadj.

Early partial results after polls close at 8 pm (1800 GMT) on Saturday will give some guide to the make-up of the assembly but full preliminary results are not due until Monday.