We will never be silent

Op-ed: Swedish activist says anti-Israel propaganda in Europe can and must be confronted

Last Wednesday in Stockholm a swedish guy sat down in a square next to a Ship to Gaza demonstration. He was holding a sign saying: "Hundreds of rockets hitting Israel from Gaza while Israel is delivering supplies to Gaza.The blockade is legal. Are ship to Gaza’s activities legal? Humanitarian?"

He caught the attention of the ordinary Swedes passing by. They stopped by and read the sign as if they were really thinking of the words written on it. Ship to Gaza’s main spokesperson, Dror Feiler, was meanwhile blaming Israel for everything bad in Gaza that is actually the responsibility of Hamas and theirs alone.

The young man was standing alone but he never felt it. The words of truth on his sign were his protection against the hate for Israel. Nobody knows this feeling more than me because I am that young man.

Before I decided to go there alone I tried to get more friends of Israel to join me, but too many were afraid and thought that this action would give Ship to Gaza more spotlight. Most of all, they were afraid of showing support for Israel.

Supporting Israel politically has been hard in Sweden. For a long time. I wanted to change that. So I felt no other solution than going there alone. I got a message in Facebook saying one lady might come to stand with me. However, we met after the demonstration and later she posted a photo with me and my sign. Suddenly my picture received 270 ”Likes” on Facebook in different pages that shared the picture of me and my message.

A Swedish Jewish pro-Israeli blogger, Annika Hernroth, was inspired to go there alone also on the day of departure for Ship to Gaza. This time people were more eager to join. More than 20 people showed up with less than 2 days to prepare. Swedish Jewish Dialogue, the only pro-Israeli NGO in scandinavia, mobilized all new members and friends and suddenly neither me nor Annika had to be alone in the square. 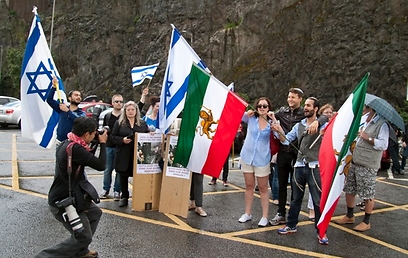 United we stood there, proud to defend Israel. Our presence seems to have made Ship to Gaza cancel a demonstration. Instead, they stayed onboard their ship so we decided to go down to see them and show them that in Sweden they will face critics and proud friends of Israel with a meassage that they should stay away from Gaza and Israel and stop their propaganda against Israel.

We managed to challenge Ship to Gaza peacefully and show that we, supporters of Israel, are diverse: People from Iran, Egypt, Israel, Swedish Jews and Swedes of all ages, men and women. 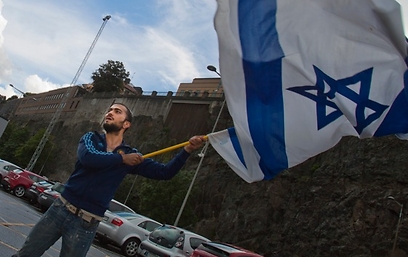 Members of Ship to Gaza could not cope with the challenge of engaging in dialogue with this diversity. It is a ship full of old leftist lies from the cold war era. They cannot admit that Islamism of Hamas is the real threat to both israelis and arabs. The Ship to Gaza movement has even admitted that it has no humanitarian goal. Their goal is primarily political.

I want to call for similar actions against them and for Israel in every harbor that they will arrive to. Together we can fight their ignorance and show that the pride over the true democratic zionist values of Israel is something we will never be afraid to show. As Rosa Parks refused to sit at the back of the bus, we refuse to stay silent today when lies sail the seas.

This opinion piece was published as part of Ynet's "I love Israel" project. Pro-Israel bloggers can send articles to opinions@y-i.co.il