Defense Minister Ehud Barak said he hoped Sunday's deadly terror attack along the Israel-Egypt border would serve as a "wake up call" for Egypt and encourage it to "take matters into its own hands" and reign in terror elements in the Sinai Peninsula.

During the attack, terrorists reportedly took control of two Egyptian armored vehicles using RPG missiles and explosives. One of the vehicles blew up near the Kerem Shalom border crossing, while the other was used to infiltrate Israel. The gunmen fired tank shells toward Israeli forces stationed at the border, but Israeli aircraft struck the armored vehicle, killing some of the terrorists inside.

Speaking to the Defense and Foreign Affairs Committee Monday morning, Barak said, "A group of terrorists, apparently from a certain type of global jihad, took control of an Egyptian outpost in Sinai, near Kerem Shalom, before dark. They seized a large van and a small armored vehicle. The van blew up near the (border) fence, opposite an unoccupied IDF guard tower. After the blast, the armored vehicle crossed the border, but then it was confronted by a small IDF force, which included a tank. An aircraft then struck the vehicle, from which two people fled. They were killed by an army force. Another six bodies were found at the scene." 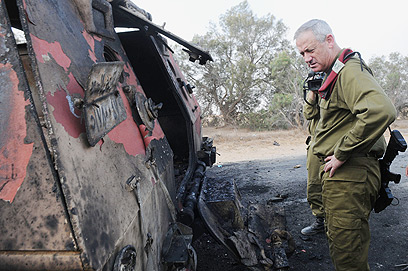 Barak called the IDF's response "sharp and decisive," and lauded the Shin Bet security service's work, which he said prevented a "much more severe attack."

An IDF spokesman said Monday that Israeli intelligence services had reports of an impending attack from Egypt's Sinai Peninsula and therefore were able to thwart the assault by suspected Islamist terrorists who killed 16 Egyptian policemen at a border checkpoint.

Israeli military spokesman Brig.-Gen. Yoav Mordechai told Army Radio the terrorists attacked the Egyptian policemen at a checkpoint along the border with Gaza and Israel, seized a truck and an armored car, then blew up one of the vehicles to punch a hole through a security fence to enter Israel.

But Israeli intelligence services had information about an impending infiltration and sent aircraft to strike at the second car the militants had seized from the Egyptian forces. "We were prepared for it, so there was a hit," he said.

Due to the attack, the Kerem Shalom crossing will remain closed on Monday for the transfer of goods from Israel to Gaza.

Egyptian analysts who were interviewed overnight demanded that Hamas security forces in Gaza cooperate with Egypt in the effort to apprehend the terrorists. "If we will be forced to strike Gaza, as Israel has, we will do it – if it is proven that those who committed the attack came from Gaza," one of the military analysts said.

It remains unclear which organization orchestrated the attack, but Egyptian daily al-Youm al-Saba'a quoted a senior security official as saying it was carried out by Islamic Jihad terrorists from Gaza and global jihad terrorists in Egypt.