Catholically-raised participants take part in special seminar meant to assist them in discovering their Jewish roots, learning about Israel

Twenty-five young Polish Jews, many of whom have only recently discovered their Jewish roots, arrived in Israel this week for a special seminar organized by Shavei Israel, an organization that aims to strengthen the connection between descendants of Jews and the State of Israel and the Jewish people.

The participants, between the ages of 18-35, most of whom were raised Catholic, came from a variety of cities throughout Poland, primarily Krakow, Katowice, Warsaw, Przemysl and Gdansk. For many it marks their first time visiting Israel.

“There is a growing thirst among young Poles with Jewish roots to learn more about their Jewish religious and cultural heritage,” said Shavei Israel Chairman Michael Freund.

“This awakening would have been unthinkable just 25 or 30 years ago, but since the downfall of Communism, an increasing number of Poles have sought to reclaim and affirm their Jewish identity. We owe it to them to assist them in any way that we can.”

Freund added that, “with the start of the new Jewish year just a few weeks away, it is fitting that these young Poles have come to Israel to rekindle their bond with the Jewish people. They represent the future of Polish Jewry, which despite decades of suffering and persecution is now beginning to thrive.

"There can be no sweeter revenge for what was done to us seven decades ago in Poland than to reconnect as many of these young Polish Jews as possible with Israel and the Jewish people.” 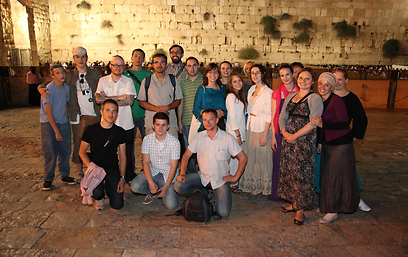 The unique program, which is run by Shavei Israel’s team of Polish-speaking rabbis and educators, is designed to assist them in discovering more about their Jewish roots and learning more about ancient and modern-day Israel.

Among the topics that will be covered are the laws of Shabbat; the upcoming festivals of Rosh Hashana, Yom Kippur and Sukkot; and “Keeping kosher in a non-kosher world.” Participants will also study the weekly Torah portion that is read in synagogue.

The young Poles will also get a chance to tour various sites in Israel such as Masada and the Dead Sea. The group will also visit the Jewish Quarter in the Old City of Jerusalem and explore the Western Wall tunnels.

Currently, there are approximately 4,000 Jews registered as living in Poland, but experts suggest there may be tens of thousands of other Jews in Poland who to this day are either hiding their identities or are simply unaware of their family heritage.

In recent years, a growing number of such people, popularly known as the "Hidden Jews of Poland", have begun to return to Judaism and to the Jewish people.