Clinton: US had nothing to do with film that sparked violence

The US government had nothing to do with a film about the Prophet Mohammad that has triggered anti-American protests in Muslim countries, US Secretary of State Hillary Clinton said on Thursday.

The film, apparently produced in the United States, sparked an attack on a US mission in Libya on Tuesday that killed the ambassador and three other Americans. Clips posted on the Internet show an amateurish production portraying the Prophet Mohammad as a womanizer, a homosexual and a child abuser.

"The United States government had absolutely nothing to do with this video. We absolutely reject its content and message," Clinton said at the start of talks with senior Moroccan officials in Washington.

"To us, to me personally, this video is disgusting and reprehensible. It appears to have a deeply cynical purpose: to denigrate a great religion and to provoke rage." 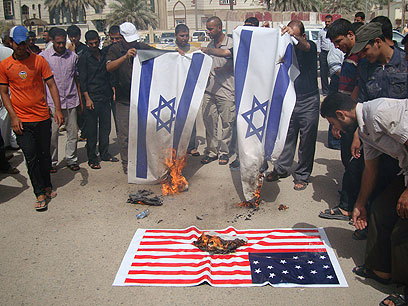 For many Muslims, any depiction of the Prophet is blasphemous. Caricatures or other characterizations deemed insulting in the past have provoked protests and drawn condemnations from officials, preachers, ordinary Muslims and many Christians in the Middle East.

While distancing the US government from the film, Clinton noted the history of religious tolerance in the United States and its commitment to freedom of speech and said there was no justification for people to respond with violence.

"I know it is hard for some people to understand why the United States cannot or does not just prevent these kinds of reprehensible videos from ever seeing the light of day," she said. "I would note that in today's world, with today's technologies, that is virtually impossible.

"But even if it were possible our country does have a long tradition of free expression which is enshrined in our constitution and our law. And we do not stop individual citizens from expressing their views no matter how distasteful they may be," she added.

"There are of course different views around the world about the outer limits of free speech and free expression. But there should be no debate about the simple proposition that violence in response to speech is not acceptable," Clinton said.