Op-ed: US Jews should carefully consider grave consequences of choosing Obama over Israel

The Obama campaign and Jewish Democratic leaders asserted that the deletion concerning Jerusalem as "the capital of Israel" was an innocent mistake and technical oversight and does not reflect Obama’s true beliefs. They claim that the president personally intervened during the convention to reinstate the language regarding Jerusalem to bring it in line with his own views consistent with the 2008 Democratic Party platform.
US-Israel Ties
Obama on the fence
Yoaz Hendel
Op-ed: White House policy toward Israel proves friendship cannot compete with interests
Obama on the fence
If this is true, how can the Democrats explain the fact that even though the omitted section on Jerusalem was reinstated, other pro- Israel sections in the 2008 platform concerning the important issues of Hamas, Palestinian refugees, and borders remain deleted in the 2012 platform and Obama did not try to reinstate these. Furthermore, the platform with the sections that were actually deleted, including the almost deleted Jerusalem section, which was reinstated at the last minute under intense pressure, are an almost exact replica of Obama’s positions in the controversial Middle East speech he gave on May 19, 2011. That speech was the first time any sitting US president stated that he believes that "the borders of Israel and Palestine should be based on the 1967 lines." Before the 1967 Six- Day War, Israel’s borders were based on the 1949 armistice lines in which Israel did not control the West Bank or east Jerusalem with its holy Jewish sites, such as the Western Wall and the Temple Mount. Consequently, Jerusalem was divided and Jews were not allowed to visit or pray at their holy sites from 1949-to 1967. Moreover, in that speech President Obama disregarded other assurances made to Israel from previous administrations concerning the Palestinian refugees and Hamas, just as the 2012 platform does. 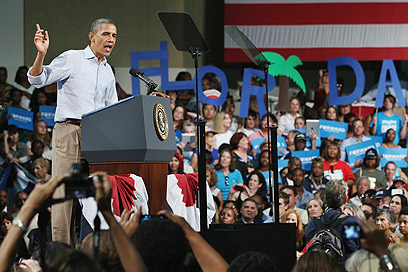 Therefore, Obama’s agenda concerning Israel during a second term will likely include the following:

Obama will try to divide Jerusalem and recognize a Palestinian state with its capital in east Jerusalem. The 2008 and 2004 Democratic Party platforms declared "Jerusalem is and will remain the capital of Israel…It should remain an undivided city accessible to people of all faiths." The original 2012 platform in which Jerusalem was unmentioned is consistent with Obama’s May, 2011 speech and with the recent State Department and White House spokespeople’s refusal to acknowledge under intense questioning by reporters that Jerusalem is the capital of Israel.

Obama will demand from Israel a complete and a full return to the 1949 armistice lines, which excludes from Israel east Jerusalem and the West Bank hills which look down at the country’s international airport and 80% of its the population. The 2008 DNC platform stated "All understand that it is unrealistic to expect the outcome of final status negotiations to be a full and complete return to the armistice lines of 1949." This pro- Israel section does not exist in the 2012 platform. Obama will demand the return of Palestinian refugees into Israel, not just to a future Palestinian state. Both the 2004 and 2008 platforms stated: "The creation of a Palestinian state should resolve the issue of Palestinian refugees by allowing them to settle there, rather than in Israel." The 2012 platform does not contain such language. Obama will recognize Hamas, the terrorist organization which currently controls the Gaza Strip, and will begin negotiations with them, despite the fact that Hamas will never recognize Israel’s right to exist and supports and sponsors terrorism. The 2008 DNC platform declared, "The United States and its Quartet partners should continue to isolate Hamas until it renounces terrorism, recognizes Israel’s right to exist, and abides by past agreements." This language is gone from the 2012 platform. American military cooperation with Israel will be reduced. The 2008 platform, for example, spoke of a "commitment which requires us to ensure that Israel retains a qualitative edge for its national security and its right to self-defense." The 2012 platform mentions only that "(the) administration has also worked to ensure Israel’s qualitative military edge in the region," with no commitment to doing so in the future. The Democrats and their Jewish supporters' denials and excuses concerning Obama’s commitment to Israel, are wishful thinking and blindly naive. US Jews should carefully consider the consequences of choosing Obama over the Jewish state.

Shoula Romano Horing was born and raised in Israel. She is an attorney in Kansas City . Her blog: www.shoularomanohoring.com