Op-ed: Iranian proxy could once again turn Lebanon into battleground for defense of foreign interests

"Yes, Hezbollah is Iran’s army" is the bold title of one out of many opinion pieces and articles published on pro-March 14 Lebanese news portals. The growing sentiment of frustration expressed by Christian and Sunni opposition groups is gaining valuable momentum and support. Both the political branch and armed movement forming the Hezbollah terrorist organization are the de facto rulers of Lebanon since the fall of Saad Hariri’s government.

This situation is highly problematic as a militia is today the Lebanese major security actor, with enough military power to control the country in less than 48 hours.
New Mideast
Hezbollah is in trouble
Guy Bechor
Op-ed: With Iran and Assad sinking, Lebanese terror group faces existential concerns
Hezbollah is in trouble
The arrogance of the Party of God in regard to Lebanese interests has become blatant. In July 2006, the killing of 3 Israeli soldiers and the abduction of Staff Sgts. Ehud Goldwasser and Eldad Regev led to a war that crippled Lebanon and its economy. In 2008, a political row pushed Hezbollah to use its weapon against the Lebanese people, and the current Syrian civil war sees Nasrallah’s party actively supporting Assad's policies, a position which many Lebanese strongly oppose. Nevertheless, in a climate of escalating regional tensions, the March 14 alliance concerns, mainly voiced by Samir Geagea, are that the Iranian proxy could once again turn Lebanon into a battleground for the defense of non-Lebanese interests.

It is in this climate of clashing political and confessional ambitions that President Michel Suleiman attempts to push forward a plan that aims at changing the structure of Lebanon’s security apparatus. In a project presented at the beginning of September, the Lebanese president called for all militias – read Hezbollah – to come under direct control and authority of the Lebanese Armed Forces. This would in no way represent the disarmament of the Shia terrorist movement but it would see its impressive amount of small tactical weapons and strategic arms coming under the direct control of the Lebanese state.

A second part of the Suleiman plan openly calls for the liberation of Lebanese territories under Israeli control (Shebaa farms and Ghajar) only through diplomatic means. This marks a true revolution in the way of dealing with the country’s relations with Israel. The last time such rhetoric has been heard was in 1982, and was pronounced by the late Bachir Gemayel.

These calls reflect an increasing rift inside Lebanese society. A trend of overt criticism and attacks against Hezbollah and its allies, the latest one being an assassination attempt of Michel Aoun, find their momentum in the period of crisis the Party of God is going through. The Suleiman plan is unlikely to succeed in the short/medium term, yet it depicts an ever more open challenge to the quasi-total control of the territory Hezbollah can exercise. 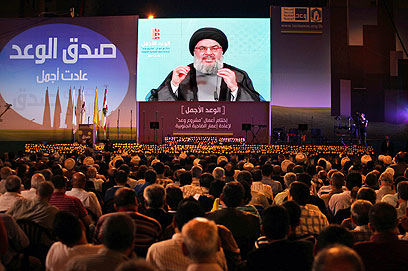 As Syria spirals down into the darkest phases of a civil war, it is highly possible that, to counter these attempts by anti-Syrian and anti-Hezbollah Lebanese parties, President Assad will step up his meddling into Lebanon’s affairs. As the Samaha affair proved during the summer, a number of Lebanese top tier actors are ready to put their career and life on the line to harm their fellow citizens in order to support Assad and provide a much-needed breathing space to Hezbollah. These spoilers are likely to increase their activity if a serious plan to put militias under governmental rule is to be genuinely discussed.

Given the fact that Hezbollah continues to be seen by Syria and Iran as a bulwark against Israel, it is highly doubtful that the organization will be willing, or even allowed to by its sponsors, to turn in the weapons that constitute its strategic deterrence force. Syria and Iran are currently feeling the heat in terms of their defense capabilities and will probably do all that is in their power to make sure that Hezbollah remains as the major security actor in Lebanon. Any forceful attempt by the Lebanese government to prove otherwise would result in catastrophic consequences for the country, possibly risking another civil war. By trying to establish new ties with the Lebanese state and to put some of its weapons under the authority of Lebanon, Hezbollah’s modus operandi as well as its command and structure will drastically change. As it copes with restructuration, the terrorist organization might possibly come under the pressure of hardliners inside Hezbollah’s leadership, as well as from Tehran, to take various measures to reassert its authority. Identity crises within terrorist organization often lead to detrimental consequences. Sensing that it is slowly but surely losing its ‘resistance’ characteristics may push Hezbollah to implement rash and destabilizing policies. On top of that, the Party of God is growing increasingly weary of ongoing international events. The Syrian uprising, the Arab spring together with international efforts aimed at curbing Iran’s nuclear program are putting the organization in a very sensitive spot. Even within the Lebanese arena the situation has become even more complicated now that Hezbollah has become a full-fledged political actor. The terrorist organization is currently torn between its relations with Iran and its growing need to negotiate with opposing Lebanese parties. In an attempt to stir things up and broaden the conflict, Syria did not shy away from an opportunity to mention that it possessed chemical weapons and may transfer a part of its stock to its Lebanese ally. While many see this as a common attempt to deter anyone from meddling in its affairs by drawing a tacit red line, the act itself reveals a lot about Syria’s brinksmanship policy of making Hezbollah part of the conflict equation. Apart from explicitly pledging its support to Bashar Assad, Hezbollah is actively participating in Syrian infighting as a number of its operatives are conducting support missions inside the Syrian territory. Embattled Syria shows signs that it is desperately trying to capitalize on Hezbollah’s renowned power of nuisance. Proof of this lies in the fact that Syrian troops regularly cross the border into Lebanon and cause sensible damage. The same logic applied when Syria incited its citizens to protest against Israel on Nakba day, which led to a number of incidents. Assad's regime knows very well that Lebanon’s political scene is deeply divided by the revolt and it is making great efforts to use it to its advantage. Further integration of Hezbollah within the Lebanese state appears as something inevitable if the terrorist movement wants to survive the current crisis. However, under the present circumstances, Lebanon simply lacks the means to create a successful deal. If the Lebanese government is ever to deliver successful negotiations, the boundaries that used to separate Hezbollah from the state would become even blurrier and in the next round of violence, it will be very difficult for Israel to draw the line between governmental forces and terrorist guerrilla units. To make things even more complicated, Hezbollah will most likely want to hide its strategic arsenal from the state and for this it can be anticipated that long range missiles will be moved further into Shia dominated urban environments bringing civilians closer to the frontline. In the midst of increasing regional tensions, Hezbollah’s endeavor to cling on to power by way of restructuring its forces as well as the internal Lebanese power plays must be followed with the outmost attention. This remains true insofar as designing an optimal defense strategy for the northern region will in the near future depend in part on the state-militia relations brokered in Beirut.

Riccardo Dugulin holds a Master degree from the Paris School of International Affairs (Sciences Po) and is specialized in International Security. He is currently working in Paris for a Medical and Security Assistance company. He has worked for a number of leading think tanks in Washington DC, Dubai and Beirut. Personal website: http://www.riccardodugulin.com


פרסום ראשון: 10.04.12, 17:48
commentsend to friendshareshare
See all talkbacks Close all talkbacks
new comment
Next
Previous
Warning:
This will delete your current comment
cancelOk