Op-ed: Bibi-Lieberman merger may awaken all those who fear for Israel's democratic character

The fear and the changing polls eventually overcame the ego, and the result was one of the most fascinating political developments in Israeli politics. The fear of the awakening of the Center-Left, the concerns over the possible return of Ehud Olmert and Tzipi Livni and stronger Labor and Yesh Atid parties ,as well as the polls indicating a drop in public support – led to the Right's "big bang."

The merger between Likud and Yisrael Beiteinu, which was the work of Benjamin Netanyahu and Avigdor Lieberman, will make the joint party the strongest and most significant political force in Israel. Based on polls taken before the unification, a joint faction may win 50 Knesset seats.
Israeli Elections
Chance to become a leader
Emanuel Rosen
Op-ed: If re-elected, Bibi will finally be able to let go of the paranoia, boldly advance diplomatic initiatives
Chance to become a leader
Lieberman and Netanyahu understood that the divisions within the political system would prevent the formation of a functioning coalition that would implement the Right's policy. The increase in support for Shas, the rise of Yesh Atid and the possible return of Olmert and Livni to the political arena worried the prime minister, as well as the foreign minister, who was not able to present a real agenda. Therefore, Netanyahu and Lieberman decided to drop a political bomb that would precede the planned shake-ups in the Center-Left. The Right realized that only a dramatic move could unite the bloc and weaken the small parties. The merger is aimed at tightening the grasp on power and preventing background noises in order to advance historic changes in the system of governance, as well as economic and diplomatic initiatives, without interruption. Netanyahu is fed up with Shas and its limitations, and the thought that he has to pass the budget with Shelly Yachimovich sitting by the cabinet table troubles him. This is why he decided to unify Likud and Yisrael Beiteinu and make Lieberman a close partner and successor. Lieberman, for his part, is getting the large ruling party on a silver platter. He is no longer the head of a rightist party representing immigrants. The merger brought him one step closer to the Prime Minister's Residence – on the day after Netanyahu. Entering through Likud's main gate is a ticket to the big leagues. He has become the clear favorite to succeed Netanyahu and take over the rightist camp. For now he is No. 2 on the joint party's roster and will continue serving as foreign minister. He may even serve as vice prime minister in the next government. 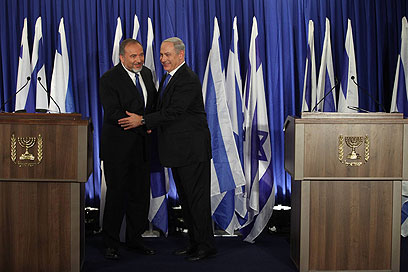 But this merger may also come back like a boomerang. There are many possible scenarios, but it is hard to predict what the future holds. The merger between Likud and Yisrael Beiteinu has created an almost extreme-rightist party. Those who were distressed by the anti-democratic winds that blew in Netanyahu's coalition should shake with fear.

With great power comes great rigidity, and even greater aggressiveness. Who will be able to stop the absurd initiatives of the eccentrics on the Right? And who will fight for the rule of law and democracy now that such a powerful force is running the political game? This fear may awaken the Center-Right and those who fear for Israel's democratic character. Some Likud officials expressed their concern that the merger may scare off potential voters. "People who are looking for a sane regime will run," Likud ministers say. "The party is becoming strange, full of rightists. It's hard to tell how the public will react." Meanwhile, Olmert is watching the developments from the sidelines, but the merger did not deter him. "The game has opened up again, and the Center-Left must close ranks," sources close to the former prime minister say. Those who thought of running alone will have to change their strategy, reassess the situation and put their egos aside. The name of the game now is unity. The ideological differences between the Right and Left are greater and clearer. There is Right and there is Left. There is capitalism and there is social democracy. Anyone who thought these elections would be boring was wrong. The shake-up is just beginning, and the next few days will bring more political earthquakes, unless the leftists will blindly go about their business and refuse to put their egos aside.