No time to celebrate

US President Barack Obama has returned to the White House from Chicago, where he celebrated his reelection. But he won’t have much more time to celebrate, as he must tackle the burning issues at hand.

The day after Obama's reelection, investors on Wall Street dumped stocks in the sharpest sell-off of the year, and the American media outlets are focusing mainly on the "fiscal cliff" of spending cuts and tax rises unless an agreement between the White House and Congress is reached by January 1.
Tense Relations
Netanyahu gambled, we'll pay
Sima Kadmon
Op-ed: Unlike Turkish vengeance, American vengeance develops slowly until it reaches breaking point
Netanyahu gambled, we'll pay
During his victory speech in Chicago Obama offered to work together with the Republicans in order to reach a compromise. On Wednesday House Speaker John Boehner offered to pursue a deal with Obama that would raise taxes "under the right conditions" to help reduce the nation's staggering debt and put its finances in order. 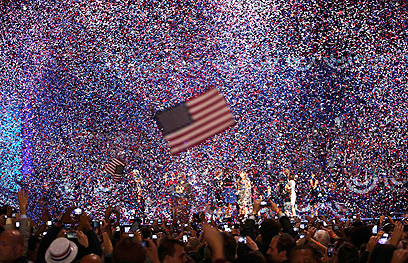 The US' national debt has topped $16 trillion, and the dispute is about how to reduce it. The official unemployment rate is 7.9%, but the actual number is much higher, as the unemployment rate that the government calculates includes only those without jobs who have actively searched for a job in the previous four weeks. The decrease in the unemployment level is steady but slow. Obama wants to lower the unemployment rate by announcing new infrastructure projects - highways, fast trains and airports. This will of course require additional government funding.

Iran is the most urgent foreign policy issue on the table at the Oval Office. Obama will apparently impose harsher sanctions against Iran towards the end of the year, but at the same time he will try to bring the Iranians back to the negotiation table.

On the eve of the elections the New York Times ran an article saying the US and Iran conducted secret talks that resulted in an agreement to meet following the elections.

Afghanistan also poses a challenge for the president, who declared that the US and NATO's military presence in the country would end in 2014. This war is the longest the US has ever been involved in – 11 years – longer than World War Two and the Vietnam War.

The main problem will be turning security over to the Afghan forces, in part due to the fact that local soldiers murder their foreign instructors, while Taliban rebels, who want to regain control over the country, threaten to further undermine stability. In any case, it appears that Obama is determined to withdraw from Afghanistan, at almost any cost.

China will continue to be the US' greatest long-term challenge in the international arena, and the Obama administration is seeking to expand Washington's influence in the Far East.

AP contributed to this article