Fundamentalist group determined to see more women in positions of authority. 'If liberals continue to separate religion from normal life, people will not listen to them,' member says

The rise of the Muslim Brotherhood to power in Egypt has brought with it a new group of female politicians who say they are determined to bring more women into leadership roles - and at the same time want to consecrate a deeply conservative Islamic vision for women in Egypt.

Women's rights have sprung to the forefront of the debate in Egypt as members of an Islamist-dominated assembly wrestle over the writing of a new constitution for the country. The power of Islamists, who dominated parliament elections last winter and who seized the presidency with the election this year of the Brotherhood's Mohammed Morsi, has worried secular and liberal Egyptians who fear they will restrict rights of women and minorities.

The women of the Brotherhood say the fundamentalist group is doing more than any other political movement in Egypt to promote women in a political scene where men have always held a near total monopoly. Confident and articulate, the women say they are pushing for a greater voice within the Brotherhood itself and its political party, the Freedom and Justice Party, where the leadership is entirely male.

The number of women in prominent positions in Egyptian politics remains tiny, as it was under the ousted secular president, Hosni Mubarak. But in the new Egypt, if a woman does hold a high post, she's most likely a member of an Islamist group. Morsi has appointed three women - two of them Islamists - to his 21-member team of advisers and aides. Of the six women on the 100-member assembly writing the constitution, three are Brotherhood members.

Their vision is a world apart from that of liberal women's rights activists, who fear that Islamist women in power will only carry out the Brotherhood agenda of implementing its conservative interpretation of Islamic law.

Azza el-Garf, one of the Brotherhood women on the constitution-writing panel, said the "first" role of women in Egypt is "inside the family, as a wife and mother," while politics or work comes second. "Women are responsible for raising the new generation ... this means the future of Egypt is in our hands," she told The Associated Press.

El-Garf, a 47-year-old mother of seven, said that a woman's role in her family need not contradict with her participation in politics, saying that she balances these two responsibilities. El-Garf joined the Brotherhood when she was 15 and has done social work and community organizing for the group.

Secular feminists, she argues, are out of step with Muslim-majority Egypt's conservative society.

"We speak on behalf of the street," said el-Garf, who like most Egyptian Muslim women wears a head scarf. "Egyptian people are very religious, devout people. If (the liberals) continue to separate religion from normal life, people will not listen to them."

El-Garf was one of three women from the Brotherhood's Freedom and Justice Party elected to the first parliament formed after the revolution, which had fewer than a dozen female lawmakers among its nearly 500 members. The body has since been dissolved, but she plans to run in new parliamentary elections to take place once a new constitution is ratified. 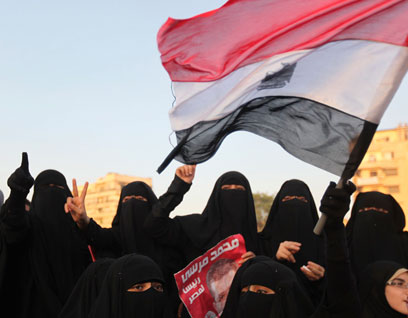 Islamists who make up the majority on the constitution-writing assembly are racing to try to finish the document in the coming weeks to put it to a referendum. One of the biggest fights is over an Islamist-backed clause that would call for equality between men and women but only if it does not contradict Islamic law, or Shariah. Liberals say that condition will allow influential ultraconservatives to severely restrict women's rights. A seventh woman who was on the assembly - Manal el-Tibi, a non-Islamist activist - resigned in September in protest over that and other articles concerning women.

Omaima Kamel, perhaps the most powerful of the Brotherhood women, defended the clause. Kamel is a member of Morsi's advisory team and sits on the constitutional panel.

In a recent interview on state TV, she said that without the phrasing, certain rights that Shariah gives to men and not to women could be overturned - such as men's right to marry up to four women or inheritance laws that give a greater to share to men than women. Such polygamy and inheritance laws existed during the Mubarak era and in most Muslim countries.

Kamel, a 51-year-old doctor, dismissed fears that hardliners would use the clause to pass harsh restrictions on women, saying only rulings of Shariah that are "firmly established, with no controversy around them," like polygamy and inheritance, could be applied.

The clause was also needed to ensure Egypt is not beholden to international women's rights accords that she said would impose "complete equality" and "strip us of our character as a people who are religious and respect Islam."

Other issues have stirred up trouble for the Brotherhood's women, particularly the issue of female genital mutilation, which is known as "circumcision" in Egypt and is widespread despite a 2008 law banning it. Both el-Garf and Kamel have been quoted in the Egyptian media as speaking of allowing the practice to a degree, but each later denied making the comments. Now they both are circumspect in talking about it.

"We have problems in education, health care, and security," she said. "These issues (of FGM) do not bother anyone, we have bigger issues," el-Garf told The AP, adding, "I respect all laws," in reference to the ban. Kamel called FGM a "bad practice" that should be addressed through awareness campaigns.

Like other female Brotherhood politicians, Kamel says she is determined to see more women in positions of authority.

The Brotherhood is "trying to put the cornerstones for the right path toward democracy" within its political party, including bringing more women into the leadership, she told The AP. But she added that this will take "a few years" because there are currently few women with the political experience to compete for top positions in the party.

Liberals say the Brotherhood women are just a token cover for an agenda they consider deeply opposed to women's rights.

Having Brotherhood women in authority "is even more dangerous than not (having them), given their ideology," said Hoda Badran, a veteran women's rights activist and chair of the Egyptian Feminist Union.

Bahy Eddin Hassan, director of the Cairo Institute for Human Rights, said the Brotherhood's female members "don't believe in the concept of basic women's rights ... We don't have illusions about how much progress we can make with them."

Sally Zohney, a founding member of the local women's rights group Baheya Ya Masr, said the constitution is a "lost cause" given the Brotherhood's ability to rally public support. The liberal side, she said, has to work to advocate an alternative vision among Egyptians.

"We have to start reaching the public, and fast," she said.