What's all the fuss about? There is no need to panic. So the UN recognized the West Bank as a non-member observer state. Big deal. Does this status give (half of) the Palestinians a state? Of course not. Does it grant them financial independence? Don't make us laugh.

So what actually happened here? The UN General Assembly, an impotent body without any authority, passed a ridiculous and completely illogical resolution that grants observer status to a state that does not even exist – and will never exist unless it reaches an agreement with Israel. Not with the UN. With Israel. Without Israel's consent there is no Palestinian state, regardless of how many countries support it in the General Assembly.
Israeli Response
Credit goes to Netanyahu
Shimon Shiffer
Op-ed: PM's spin doctors will say Israel must accept PA's upgraded UN status to ensure US support vis-à-vis Iran
Credit goes to Netanyahu
The General Assembly will solve nothing, just as it hasn’t solved anything else in the past. Syria is a good example. What did UN chief Ban-Ki-moon and his envoys achieve there? Nothing. Assad simply ignored them, just as Ban's predecessors were ignored when they tried to intervene in the internal affairs of other countries, such as Rwanda and Sudan. Joseph Stalin's aides once told him that the pope will not approve of the steps he was about to take. The dictator replied: "How many divisions does the pope have?" How many divisions does the UN have? The only ones who can "physically" intervene in any conflict with a fair amount of success are the Americans. This has been proven on numerous occasions. 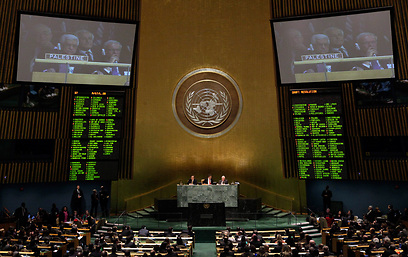 The General Assembly is not only impotent, it is also scandalously one-sided. When Ahmadinejad, the leader of one of the member states, demands to wipe Israel - another member state - off the map, the representatives of the majority of member states react with either enthusiasm or indifference. No one calls to put the Iranian leader on trial.

As for the claims that the Israeli government was "caught off guard," "responded too late" and that it "didn't read the map correctly," let's be honest. Had Israel launched its efforts to block Abbas' initiative "on time," would the outcome of the UN General Assembly's vote have been any different? In an Assembly consisting of 60 Muslim nations and dozens of pro-Arab states – the game was fixed. So please, don't panic. In the 1950s David Ben-Gurion coined the phrase "Um-Shmum (um is the Hebrew acronymic pronunciation for 'UN', and the 'shm'-prefix signifies contempt or irony). And he was right.