The only force in the Middle East that can beat the Israeli army is a bunch of ragged reporters. Had it not been for the fear of world opinion the Army would have rooted out Hamas and its rockets. That job remains on the "to do" list.

World opinion matters because Israel’s natural friends are democracies. Politicians in democracies will follow public opinion. If the voters hate Israel, their businessmen will not purchase Israeli products, their politicians will cease to support Israel and anti-Israeli legislation will be passed. The boycott could become a reality.
New Olah
Becoming Israeli during Gaza operation
Leigh Cuen
Op-ed: New olah recounts first experience as Israeli living under threat of bus explosions, missiles
Becoming Israeli during Gaza operation
The Palestinian strategy of undermining Israel before the court of world opinion has been operating for some 30 years, piling victory upon victory. The trauma of Cast Lead, Goldstone and Mavi Marmara has left Israel emasculated, unable to use its own army. The BBC, with its halo of ‘impartiality,’ is the world leader in dissimulation. That the Jabari assassination was a response to an unprovoked barrage of more than 120 rockets was barely explained; the BBC aired dead Syrian children passed off as Palestinians; a ‘badly injured victim of Israeli bombing’ was filmed moments later walking around healthily. The BBC shrugged it off – "perhaps he just recovered quickly." A glancing reference to "an incendiary device" going off is almost all the BBC tells you of the Tel Aviv bus bomb; a BBC documentary airing gruesome pictures of injured Palestinian children appears designed to incite racial hatred against Israelis. 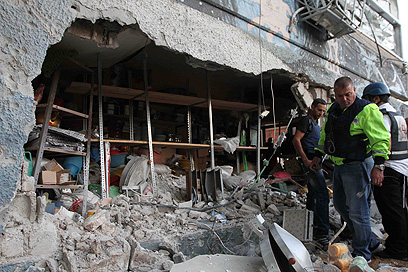 Each of these is a breach by the BBC of a number of its own rules. Yet Israel fails to respond.

The concept of a ‘proportionate response’ is wrongly explained by the BBC as a facile number count – 130 dead Palestinians: four dead Israelis - conclusion, Israeli actions are disproportionate.

English case law, to which the BBC is subject, permits what is reasonably required to achieve a reasonable aim. By that token, Israel’s actions are far short of sufficient, since it has doubtless failed to stop the rockets. Israel should press the point in court, not ignore it. Even on the facile ‘body count’ parameter, looking at the ratio of combatants to civilian casualties Israel is seven times more ‘proportionate’ than the forces in Afghanistan and Iraq. But these arguments are not getting across. Israel is losing this battle because it has barely begun to fight. It needs to mount a carefully directed, massively funded campaign. Journalists need to be courted, wooed, educated and trained. Complaints against media must be lodged and legal claims brought. Until Israel enters the fray of world opinion, its world beating army could yet again find itself sitting uselessly on the sidelines.

Trevor Asserson is the senior partner of Asserson Law Offices, the largest English Law firm in Israel. He is recognized as the UK’s leading expert on the BBC’s portrayal of the Middle East.