The 2013 elections have already been decided. Benjamin Netanyahu will be the next prime minister. I am also willing to bet that Tzipi Livni will be foreign minister (the Bibi-Lieberman government will need someone who can make contact with the outside world).

We are getting caught up in these bogus, exaggerated dramas in the divided left-center bloc and forget that on January 23 the newspaper headlines will read, "Third term for Netanyahu." Bibi will become the first prime minister in Israel's history to serve three terms.
Netanyahu's Dilemma
Between Livni and Bennett
Baruch Leshem
Op-ed: PM must decide whether he needs centrist or rightist votes to bolster his party
Between Livni and Bennett
I'm assuming that during his next term Netanyahu won't initiate any dramas either. He won't annihilate Iran and won't divide the Land of Israel. There will be small wars and phony peace talks. The question, therefore, is whether anyone from within the "national camp" will stand up to its shallow leadership in the 2017 election campaign and demand a change. Will it be Lieberman? Or maybe Gideon Sa'ar? Or has Netanyahu already clinched a fourth term because no one has the courage to challenge him? And what will become of the left-center bloc, which is riddled with infighting? Here is another guess: Ehud Olmert will return. The appeal against his acquittal will be rejected, the Holyland affair will end with another closed case, the center-left parties will realize that they cannot go it alone, and Olmert will try to form an alternative. 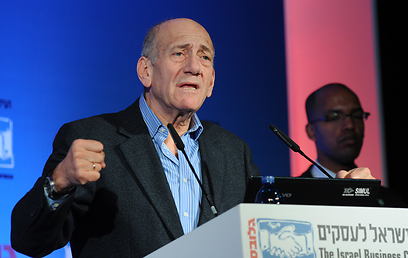 Gabi Ashkenazi will join after the cooling-off period ends, with a few million in his bank account. Yair Lapid's appetite for politics will be replaced by despair and exhaustion, and he will also join. Maybe Tzipi Livni may also come aboard, as will some new, hip politician who will rise to fame via Facebook. And what was supposed to happen in the 2013 elections will happen four years later – Olmert versus Bibi.

Of course, this guess may turn out to be a joke. None of us knew about Mofaz and Netanyahu's plan to merge, just as we did not know Likud would merge with Liebeman's Yisrael Beiteinu. We also had no idea Livni was planning to form her own party and that Amir Peretz would defect from Labor and join her. When everything is random and temporary and detached from any real roots – anything can happen. Livni may surprise everyone and win 20 Knesset seats, while bringing Likud down to 32 and leaving Labor with 20 plus. But I predict Livni will eventually join Netanyahu as his foreign minister. These predictions are meant to show one thing: We are not really witnessing any political drama here. The 2013 elections will change nothing. Israel is waiting for a leader; for change; for real drama. On the other hand, the voting patterns (according to the polls) show that Israel is not really waiting for all of these things. It is pleased with the way things are. And there are always the next elections to look forward to - the 2017 elections - which will really be dramatic and unpredictable.