Syrian rebel to Ynet: Israel will benefit from backing us

In special interview, Syrian woman who left comfortable family life in Canada to help rebel forces in Aleppo and Idlib says Israel making 'big mistake' by not supporting struggle against Assad. Syrians are against extremists, she adds, but would 'cooperate with the devil' if it would help their cause

"In Aleppo I saw one of the Free Syrian Army commanders fire a few shots at a Syrian army tank. Two young men, the tank's drivers, jumped out and began running for their lives. The incident was very amusing. I burst into laughter in the middle of a battle."

Thabia Qanfani, an engineer, was born in Damascus and settled with her family in Canada after leaving Syria in 1995 for a job in the United Arab Emirates. In a special interview with Ynet from her home in Toronto, she describes her rare and inspiring journey, which led to her joining the rebels in the Aleppo and Idlib provinces.
Regime in Damascus
Assad era coming to an end?
Ynet
NATO Chemical warfare, UN evacuation, rebel unification – all signs are pointing in direction of Syrian regime's demise
Assad era coming to an end?
"I couldn’t go back to Syria because of the difficulties involved in living there. After one grows accustomed to the way of life in the UAE and other places, it is hard to go back to Syria," says Qanfani, 41, who has been living in Canada for the past decade. But over the past year, as a civil war rages in her homeland, Qanfani decided to put the "Canadian dream" on hold and chase after another dream – a Syria without President Bashar Assad. "My entire family supported me – my husband, mother and son, who encouraged me to help other children in Syria. It is hard to up and leave your family like that, but I had to help the innocent Syrians," she tells Ynet. "At the onset of the revolt I tried to send money to many Syrian families and post articles about the victims on Facebook, but the revolt initially failed, and the situation in Syria deteriorated, so I decided to act on the ground."

In May Qanfani traveled to Egypt. "I met numerous politicians there and realized that their presence is not doing any good. I realized that they have no political culture, and this is what caused the foot-dragging at the beginning of the revolution," she says.

A month later Qanfani arrived at her next destination, Turkey. "I met officers from the Free Syrian Army and suggested to unite the opposition and set up a political council that would represent the revolutionary army," she recalls. 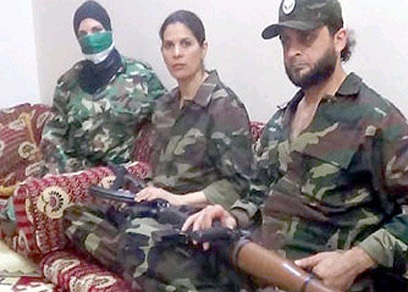 According to Qanfani, many officers were convinced. "In Turkey we began formulating a joint command for the rebel units. Meanwhile, I joined the Free Syrian Army battalions on the Turkish-Syrian border. As I entered Syria, everything suddenly became an adventure. I became familiar with many Free Syrian Army battalions in the country and saw up close the scale of the sacrifice the fighters were making," she says. For the next four months Qanfani traveled back and forth between Syria and Turkey. The longest period of time she spent with rebels operating deep within Syrian territory was 10 days – in Aleppo, the country's largest city. "While I was in Aleppo the Berri clan, which is loyal to Assad, treacherously butchered nine teenagers belonging to the Free Syrian Army. The regime's forces asked the FSA for a 24-hour ceasefire, but the clan violated the truce and murdered nine brave youngsters," she recounts. Qanfani pins her hopes on Syria's younger generation, which is fighting to liberate the country from the "butcher from Damascus." She says the youngsters' task is to "build a country and not butcher one another, but Assad, with his egoism and criminality, does not understand this." 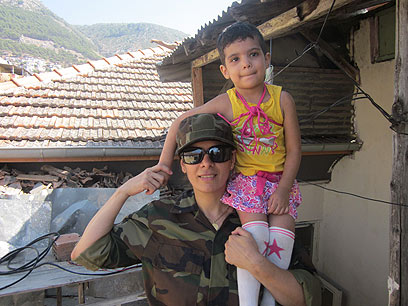 She believes the rebel forces are just as powerful as the units that are loyal to Assad. "The massive presence of the Free Syrian Army in Aleppo proves that it is determined to win. I've seen many rebel fighters defeat Assad's forces," she says.

More than 40,000 people have been killed since the uprising against Assad began in March 2011. "Assad could not have continued the campaign in Aleppo and in the other parts of Syria without the daily assistance - in the form of equipment or fighters - from Iran, Hezbollah and Russia. I've seen with my own eyes Iranians and Hezbollah members who joined Assad's forces. I can tell the difference between Syrians and Iranians or Lebanese," says Qanfani, who did not take part in the actual fighting but understands that an armed struggle is necessary in order to achieve the ultimate goal - toppling Assad. "Unfortunately, the Syrians are forced to use weapons to protect themselves," she says. 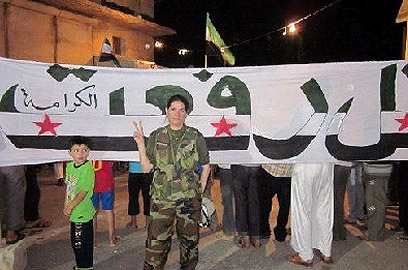 'We want to live in peace.' Qanfani in Syria

Media outlets affiliated with the Assad regime have referred to Qanfani as a "terrorist" and as someone who "collaborates with Israel." It took some time before she agreed to speak with Ynet. "Many opposition members do not want to speak with the (Israeli) media because they know false accusations will be made against them; accusations related to the myth of the false resistance created by Hafez al-Assad, Bashar's father, who was portrayed as someone who stood up to Israel and protected the Arabs. He brainwashed people," Qanfani claims.

Qanfani says the Syrian opposition members and civilians she has met "all say the same thing: 'We are not enemies of Israel and we will not harm it; but if Israel continues supporting Assad, it will lose friends that may turn out to be more loyal than Assad and his cronies.' "In Arabic there is a saying that all the rebels agree on: 'My neighbor, you are in your home and I am in mine.' It means that the rebels have no interest in Israel. Assad lied to us and treated us like fools with regards to the Golan Heights issue. For 41 years he did not fire a single shot at Israel. We want to live in peace and provide for our children. From now on we will not be involved in any war," she says. 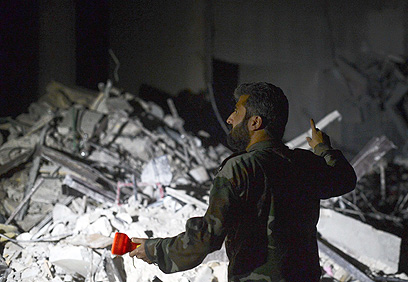 Qanfani urged the international community to support the rebels in their battle against Assad's regime. "The Free Syrian Army and all the rebels called on the world to provide military assistance and urged NATO to intervene in order to oust Assad. They expected to world to support them, but unfortunately it abandoned them," she says.

"Had the international community intervened from the beginning and ousted Assad or ordered him to leave immediately, perhaps the situation would have been much better than it is now. The Syrians' hatred toward the entire world, including Israel, has grown because from their point of view the world is supporting Assad. In my opinion, the Israeli government had an opportunity to achieve a permanent peace with Syria, but it lost it by supporting Assad. "The rebels, in my opinion, would welcome any support from Israel. They have already requested military aid from a number of sources, including Israel. But your decision-makers are not showing any interest in the rebels, and this I believe is a big mistake on the part of the Israeli government, because throughout history every revolution eventually succeeded, even if it took a while," she tells Ynet. The international community fears that once Assad is removed from power Syria will fall into the hands of extreme Islamist elements. It appears that some of these elements are already trying to infiltrate rebel forces and use the revolt for their own interests. Does this worry Qanfani and her associates? "There is a fear that extremist elements will take over, but so far the rebels have resisted their infiltration attempts," she says, but adds that "should the international silence continue, the rebels will need the assistance of any external element to put an end to the problem. I don’t see al-Qaeda people on the ground, but I can tell you that if the international community will not come to our aid – this will give al-Qaeda and opportunity to enter the picture. "The rebels are not in favor of extremism, but they are willing to cooperate with the devil if it will help them bring an end to Assad's rule," warns Qanfani, while mentioning that she drew the ire of some rebel commanders when she refused to wear a veil while she was embedded with a battalion that receives funding from Salafis in Saudi Arabia. "They were not against me because I am a woman, but because I walked around without a veil," she explains. Addressing reports that the Assad regime may use chemical weapons against the rebels, Qanfani says "everyone is afraid of this. The Free Syrian Army will not use (chemical weapons), but if Assad and his criminals begin killing in an even crueler fashion, the Free Syrian Army will employ a different strategy regarding chemical weapons." Despite the dire situation in Syria, Qanfani remains optimistic. "The current devastation in Syria is not important. All of this has been decreed upon us. The most important thing is to protect and save the people. Most of the homes in the country are rundown; the garbage fills the streets and dilapidated structures are about to collapse. The poverty is severe, but with Allah's help, after the fall of the regime, the money that has been robbed by Bashar and his family will be used to build Syria," she says. "There will be tall buildings and wide streets and highways; large bridges and even a subway. Syria will become the jewel of the world and it will attract foreign investments and tourism. Syria will reclaim its status as the mother of all cultures." Will you move back to Syria if Assad falls? "If my presence in Syria will help and I will be able to build the country and offer advice in the spirit of the freedom and democracy that exist in Canada, introduce legislation related to the regime and civil rights, freedom of expression and thought, and help open Syria up to foreign investment and European cultures – then I will certainly try to be with the Syrians and work with them."