Op-ed: Criticism of E1 development plan shows EU policy is based on information from Palestinian sources

Last week the EU's Foreign Affairs Council issued a statement about recent developments in what it called the "Middle East Peace Process." The EU stated that all parties must avoid acts which undermine confidence and the viability of a two-state solution. The statement showed how detached the European Union has become from the reality in Israel.

The fact is that there has been no peace process at all since the Palestinian leadership decided to walk away from bilateral negotiations with Israel in 2009, a move that was the result of a calculated change in strategy in PA politics regarding Israel.
European Criticism
Our right to build
Hanoch Daum
Op-ed: E1 zone, where new housing units will be built, was part of Israel even on Olmert's map
Our right to build
Furthermore, most EU countries undermined the chances of a negotiated deal on the two-state solution by voting in favor, or by abstaining from voting against, the unilateral UN statehood bid by the Palestinian Authority in November. The EU thereby became an accomplice in abrogating the Oslo Accords. These accords include the following passage in article 31: "Neither side shall initiate or take any step that will change the status of the West Bank and the Gaza Strip pending the outcome of permanent status negotiations." The Palestinian Authority bypassed permanent status negotiations in order to obtain world recognition of a Palestinian state. It was clearly an attempt to change the status of the West Bank. This unilateral act clearly undermined confidence. It also endangered relative quiet and the fragile status quo in the West Bank. This has been made clear by a series of violent incidents over the last two weeks. Palestinians in Hebron even announced on Saturday that the third intifada (uprising) had begun. But there is more. Reading the Council's statement carefully brings to light that the EU obviously bases its policy on information from Palestinian sources or from NGOs affiliated with the Palestinians. For example, when speaking about the ceasefire lines that existed before the Six Day War in 1967, the EU uses the word "borders." These "borders" were in fact armistice lines that came into being after Arab aggression against Israel in 1948. The Palestinians speak about borders because their existence would enhance their claim to the West Bank. When expressing "deep dismay" and "strong opposition" to Israeli plans to develop the so called E1 area between Jerusalem and Ma'ale Adumim, the EU stated that this plan would "jeopardize the possibility of a contiguous and viable Palestinian state." The EU even claimed that the plan "could entail the forced transfer of civilian population." These too are claims coming from propaganda used by the Palestinian Authority.

The facts about E1 show that the plan in no way threatens the contiguity of a viable Palestinian state.

E1 is an 11.7 sq. km area atop the barren hills adjacent to the eastern fringes of Jerusalem, joining it to Ma'ale Adumim, which is a suburb of 40,000 residents 4.5 kilometers east of Jerusalem. The town is within the Israeli consensus. Every Israeli government, including the Rabin government, has stated that Ma'ale Adumim would be part of Israel in any permanent agreement with the Palestinians and that development of the E1 area was necessary to avoid Jerusalem becoming an outlying frontier city once again. This had been the case before and after 1948 until 1967, when Jerusalem was divided and under constant attack. The E1 area, which is part of Ma'ale Adumim and within Area C, has been the scene of relentless illegal Palestinian building and land grabs by Bedouin tribes. In Area C, according to the Oslo 2 Accord, Israel retained the powers of zoning and planning.

Building in E-1 will not threaten the contiguity of a Palestinian state because east of Ma'ale Adumim at least 15 kilometers of land remains to connect the north West Bank to the south. Furthermore Israel has developed a plan for a bypass road east of Ma'ale Adumim that would connect Bethlehem to Ramallah. The new road would actually reduce traveling time for Palestinians.

The map of Israel below shows clearly that the development of the E1 area would not jeopardize a contiguous Palestinian state and that the corridor which would connect the northern West Bank to the south is of the same size as the corridor that existed in Israel prior to the Six Day War. 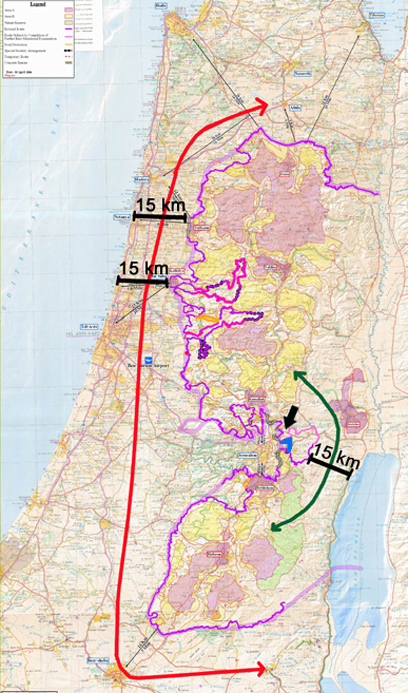 As for the EU claim that developing E-1 could entail the forced transfer of civilian population, E1 is an area almost empty of residents. The only Palestinians living there are illegally dwelling in the area. In this connection it is important to note that no Israeli settlement activity has ever led to any transfer of Palestinian populations.

The EU also ignores the fact that the PA is creating facts on the ground in east Jerusalem. In 2001 the late PLO leader Faisal Husseini said that building without permits in the Jerusalem area was one of the Palestinian weapons in the struggle against Israel. Today, more than 40% of the houses in east Jerusalem are built illegally. Muhammed Nahal, an expert on urban planning employed by the PA, also drew up a plan to construct three Palestinian cities around Jerusalem. This was done in order to surround Jewish neighborhoods. The second intifada prevented the execution of the plan. At the end of its statement about the Middle East peace process the EU calls again for intra-Palestinian reconciliation as an important element for the unity of a future Palestinian state and for reaching a two-state solution. The statement released following a meeting of EU foreign ministers in Brussels was followed by a condemnation of "inflammatory statements by Hamas leaders that deny Israel's right to exist." According to Israeli officials, four EU countries even tried to block the condemnation of these "inflammatory statements." The fact is that these are not merely statements, but official Hamas policy. Hamas is convinced that relentless attacks on the Israeli population will eventually cause the collapse of Israeli society and thereby the demise of the State of Israel. It is hard to fathom why the EU favors reconciliation efforts between the PA and Hamas in order to reach a two-state solution while at the same time it admits that Hamas leaders call for Israel's demise. The speech of Hamas leader Khaled Mashaal during his recent visit to Gaza made clear that Hamas cannot be a partner in any peace process and that the terrorist organization will never recognize the State of Israel. According to Mashaal, all the territory of what is now Israel belongs to the Palestinians. He said that there will be no relinquishing or forsaking of even an inch or small part of it. These statements drew no immediate condemnation by the European Union. On the contrary, two days after Mashaal made these statements the EU again called for reconciliation between Hamas and the PA as an important element for reaching a deal on the two-state solution. This all shows how detached the European Union has become from the reality in the Palestinian Israeli conflict and how Palestinian propaganda has influenced European decision making.

Yochanan Visser is a freelance journalist and the director of Missing Peace, an Israel-based information office