Activist strips down in Stockholm in demo against Sharia law as Egypt gets ready for second round of referendum; Islamists, opponents clash in Alexandria

With the second round of voting on Egypt's draft constitution slated to begin on Saturday, a young Egyptian blogger famous for her nudist activism had decided to strip naked yet again in protest against the contentious document.

Aliaa Magda Elmahdy, 22, was photographed fully nude and holding up an Egyptian flag outside her country's embassy in Stockholm on Thursday despite the sub-zero temperatures in the Swedish capital.

A slogan painted on her body read "Sharia isn't a constitution," referring to the strict principles of Islamic law.

Elmahdy was joined in her protest by two members of the Swedish feminist organization Femen, known for its topless activism and use of sexual imagery, according to Gulf News. The two held up anti-religious placards over their private parts. The slogans on their posters targeted Egypt’s president Mohamed Morsi, Islam, and religion in general. Elmahdy, a student at the American University of Cairo, triggered an uproar in Egypt in October 2011 after posting nude pictures of herself on her blog to protest limits on free expression.

The two sides hurled rocks and stones at each other in the Mediterranean port city, prompting police to fire tear gas to separate them. Volleys of tear gas containers fell into the sea as security forces cordoned off the crowds to prevent further clashes between the Muslim Brotherhood members and ultraconservative Salafis on one side, and groups of young protesters on the other.

It was not immediately clear who started the fight, which added to the already tense political crisis over the draft charter.

The Islamists had called for a massive rally Friday outside the Qaed Ibrahim main mosque in the heart of Alexandria. About 20 political parties had issued a joint statement, saying they would not hold a rival rally in the city to avoid clashes.

Security forces cordoned off streets leading to the mosque as throngs of mostly long-bearded Salafi Islamists gathered for what they called "the million-man rally to defend clerics and mosques." Islamists chanted "God is Great," and warned opponents, "with blood and soul, we redeem Islam." The rally was called in response to last week's violence, when a well-known Alexandria preacher and ultraconservative Salafi cleric, Sheik Ahmed el-Mahalawi, was trapped inside a mosque for 12 hours while his supporters battled rock-throwing opponents outside with swords and firebombs.

El-Mahalawi, 87, stirred anger with a sermon last Friday in which he denounced opponents of the Islamist-friendly draft charter as "followers of heretics" – something he denied in a sermon on Friday, accusing media instead of spreading "lies."

He claimed that last week's clashes were meant to prevent the voting from taking place.

"The real goal here is for the referendum not to take place," he said Friday, adding that his backers had been ready with "teams of people equipped with all facilities to end the siege on the mosque" but he held them back because Salafis "don't want to shed blood."

The referendum on the constitution is to be completed Saturday with voting in the remaining 17 of Egypt's 27 provinces. The first round was held in 10 provinces last Saturday, including in Egypt's biggest cities, Cairo and Alexandria.

Rights groups and opposition filed complaints of vote violations after last week's voting. Turnout was low, around 32%, and unofficial results showed the Islamists' "yes" vote getting 56% of the ballots.

Controversy over the new constitution has in the past month plunged Egypt into political turmoil unprecedented since the February 2011 ouster of Hosni Mubarak, the longtime authoritarian and secular-minded ruler. 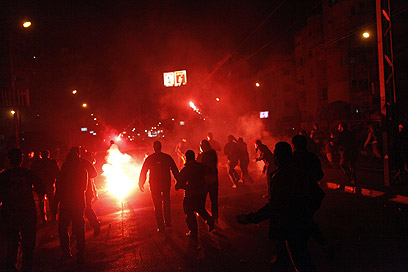 The draft has split the country into two camps. On one side are the Islamists from the country's most organized group, The Muslim Brotherhood, from which Morsi hails, and their backers from various ultraconservative Salafi and former Jihadist groups.

The other camp is the opposition, led by the National Salvation Front. It's an alliance of liberal parties and youth groups that is backed by Christians and moderate Muslims who fear Brotherhood's attempts to monopolize power by passing a constitution that enshrines a greater role for clerics and Islamic Shariah law.

The moves have also split state institutions. The judiciary became another battleground, with the powerful Judges' Club calling on its members to boycott the vote while Brotherhood sympathizers in the legal system and other independents insisted on supervising the vote.

Also, Zaghloul el-Balshi, the secretary general of the election committee who is also a judge and an aid to the country's justice minister, resigned Wednesday, citing health reasons. The media said his resignation was prompted by his inability to prevent vote violations in the first leg of the referendum.