Committee investigating complaints of irregularities in referendum on Islamist-backed charter. Newspaper: War over the constitution's legitimacy has begun

Egyptian judges were investigating opposition accusations of voting irregularities on Monday before declaring the result of a referendum set to show that a contentious new constitution has been approved.

President Mohamed Morsi sees the basic law, drawn up mostly by Islamists, as a vital step in Egypt's transition to democracy almost two years after the fall of military-backed strongman Hosni Mubarak.

The opposition, a loose alliance of liberals, moderate Muslims and Christians, says the document is too Islamist, ignores the rights of minorities and represents a recipe for more trouble in the Arab world's most populous nation.

Critics have also said the vote, conducted over two stages in a process that ended on Saturday, was marred by a litany of irregularities, and have demanded a full inquiry. "The committee is currently compiling results from the first and second phase and votes from Egyptians abroad, and is investigating complaints," Judge Mahmoud Abu Shousha, a member of the committee, told Reuters. He said no time had been set for an announcement of the final outcome, but it appeared unlikely to be on Monday. 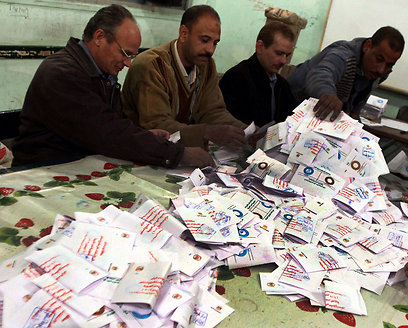 A tally by the Muslim Brotherhood, which lifted Morsi into the presidency, indicated a 64 percent "yes" vote, although only a third of the 51 million eligible Egyptians took part. An opposition count was similar, but they said the ballot had been marred by abuses in both rounds.

By forcing the pace on the constitution, Morsi risks squandering the opportunity to build consensus for the austerity measures desperately needed to kickstart an ailing economy. Highlighting investor concerns, Standard and Poor's cut Egypt's long-term credit rating on Monday and said another cut was possible if political turbulence worsened. The low turnout also prompted some independent newspapers to question how much support the charter really had, with opponents saying Morsi had lost the vote in much of the capital. "The referendum battle has ended, and the war over the constitution's legitimacy has begun," the newspaper Al-Shorouk wrote in a headline, while a headline in Al-Masry Al-Youm read: "Constitution of the minority". If the "yes" vote is confirmed, a parliamentary election will follow in about two months, setting the stage for Islamists and their opponents to renew their battle. Under the new constitution, legislative powers that have been temporarily held by Morsi move to the Islamist-dominated upper house of parliament until a new lower house is elected. The make-up of the Supreme Constitutional Court, which Islamists say is filled with Mubarak-era appointees bent on throwing up legal challenges to Morsi's rule, will also change as its membership is cut to 11 from 18. Those expected to leave include Tahani al-Gebali, who has described Morsi as an "illegitimate president". The head of the Muslim Brotherhood's Freedom and Justice Party, Saad al-Katatni, wrote on Facebook that the group's members were "extending our hands to all political parties and all national forces", adding: "We will all start a new page." But the opposition National Salvation Front says the new basic law deepens a rift between the liberals and Islamists who combined to overthrow Mubarak, and will extend the turbulence that has taken a heavy toll on society and economy. The opposition said they would continue to challenge the charter through protests and other democratic means. "We do not consider this constitution legitimate," liberal politician Amr Hamzawy said on Sunday, arguing that it violated personal freedoms. "We will continue to attempt to bring down the constitution peacefully and democratically." The run-up to the referendum was marred by protests, originally sparked when Morsi awarded himself broad powers on Nov. 22. At least eight people were killed when rivals clashed in protests outside Morsi's official palace in Cairo. Violence also flared in the second city, Alexandria. Follow Ynetnews on Facebook and Twitter