Too little, too late

Op-ed: Instead of obsessing about Israel, human rights groups should focus on real criminals of the world

Congratulations. Human Rights Watch published a report this week blaming Hamas for firing at Israeli cities during Operation Pillar of Defense with direct intention to kill civilians. So why are congratulations in order? Because this organization chose to be blind for eight years while Hamas and other extremists continuously fired into civilian populated areas with intention to kill, nearly every day. Even when the report was finally issued, they chose to overlook this fact and only referred to the eight days of the operation, as if it was abnormal behavior.

The truth is Israel doesn't need the aid of human rights organizations - thank God for that. But if you really care about human rights, maybe it's time to realize that the attitude of many of these organizations is problematic, not necessarily towards Israel, but towards those who really need them.
The Capital
Stop the yelling
Hagai Segal
Op-ed: Only way to quell constant criticism from abroad is to continue building in Jerusalem
Stop the yelling
Maybe some figures would be the best way to make this point: If you Google "human rights violations" and add a different name of a country each time, it could make for an interesting comparison. These are the numbers I got: I can imagine what many will say about these results - how can you even compare? Israel is much better than these other countries and therefore should care a lot more about human rights. Well, I completely agree, but that's not the point. The point is that many organizations that are supposed to reduce the human rights violations in this world don't have their priorities straight. 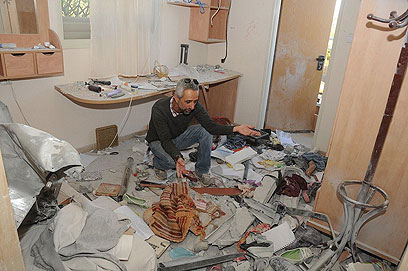 The true problem is that as long as the spotlight is on Israel, making it seem like the worst criminal of all, the attention is no longer on the true criminals of this world. Hamas forces Sharia law in the Gaza Strip, and there are countless stories about its horrid methods of terror on the Palestinians: Arrests, executions, torture, lynch and rape, and seven-year-old girls who are sent to their weddings by their own parents. But how many results do we get when we Google human rights violations and Hamas? Nineteen million, less than 10% of democratic Israel.

So how have the most horrid stories become irrelevant? Why doesn't anyone expose these actions except for amateurs with short Youtube clips that don't interest many? For some reason, everyone seems obsessed with Israel and its checkpoint policy, and not with the terrorists.

Hamas, by the way, reacted cynically to this report: It's biased, they said, because we were only protecting ourselves. I guess that since the report fails to mention eight years of continuous shooting, not many realize that terrorists with a declared death wish don't blink when they lie. The problem is, Hamas lies a lot, and not only when they wish to hurt Israel.

Two months ago, Human Rights Watch published another report that didn't receive much media coverage, describing the horrific torture and execution techniques of Hamas towards the Palestinians in the Gaza Strip.

Hamas reacted in the same manner: The report doesn't mention the occupation, they said, and refused to answer questions. Hamas understands how things work and they're using it for their benefit: As long as they can deflect the blame towards Israel, there's no limit to the crimes they can continue to commit with nobody to stand in their way.

Do we really want human rights for Palestinians? Because if we do, it's time to stop looking solely at Israel's relatively petty violations, which account for a very small fraction of the Palestinian suffering. The worst crimes are quietly overlooked by politicians and journalists alike. As Jews and Israelis, we, more than anyone should fight to expose the terrible ways of Hamas.

If we do, we won't only be promoting the interests of the Palestinians as far as human rights are concerned. If Hamas terror is weakened and their true faces will be known and revealed, we may even be taking a small step towards that forgotten goal of ours - peace.