This is your future

Op-ed: It is inconceivable that Israel, which prides itself on economic achievements, should forsake its indigent elderly

A society's social strength and moral rectitude is determined by the way it cares for its weak links. Present-day Israel has many weak populations. A fifth of all Israelis come under the heading of "poor," and the weakest section of society is, beyond doubt, the elderly. If we consider the state's attitude to its senior citizens as a mirror reflecting the face of society, I'm afraid most of us would shudder at the image reflected back at us.

The elderly currently constitute around 10% of the country's population, of which about a fifth are below the poverty line. These helpless old people are nearly completely at the mercy of society and the support allotted to them by the state. Those elderly who have no income from pension or savings receive income-support allowances that bring their total income to NIS 2,700 (about $730) for a single person and NIS 4000 ($1,080) for a couple. Much has been said recently about the cost of living in Israel, and we all know perfectly well that such a sum is nowhere near enough for a person or a family to subsist on, even at the most basic level.
Economic Troubles
Israel’s greatest threat
Jackie Frankel
Op-ed: Growing poverty level unsustainable, threatens Israel’s existence more than ‘the conflict’
Israel’s greatest threat
In wintertime everyone's living expenses go up due to the need for home heating. This year, the cost of heating is higher than ever because of the drastic hike by more than 30% in the cost of electricity, a move that will be completed on February 1 by an additional hike of some 12%. Therefore, during that period, the distress felt by thousands of elderly in Israel becomes all the more acute.

The elderly are more susceptible than other people to the hazards of cold winter weather. With old age, comes a decline in the body’s ability to regulate its temperature. The cold has severe health repercussions. The Ministry of Health and the Ministry for Senior Citizens routinely publishes guidelines on measures that should be adopted by the elderly in order to protect themselves from cold-related injuries. These measures include keeping one's home at a constant temperature of 24 deg. C., ensuring good nutrition, and engaging in physical exercise. The chief problem is that many of the elderly lack the means to follow these guidelines.

Scores of thousands of destitute old people cannot afford the high cost of heating, and are forced to forego heating their home, whether some of the time or on a regular basis. Their meager income makes them face the the inhuman quandary of choosing between heating and other necessities such as food and medication, engaging in social activities and visiting their relatives. It is unacceptable that such a phenomenon exists in a country that prides itself on its economic achievements and financial soundness. 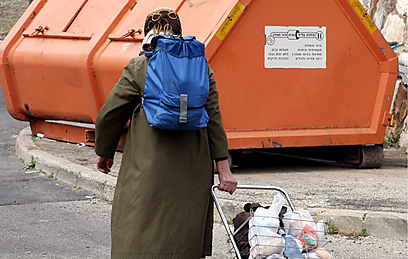 Every winter, the International Fellowship of Christians and Jews helps many thousands of old people heat their homes, by providing grants for heating and by distributing blankets or heaters. But our actions are meant to complement the state's efforts, not carry the major burden of the state's responsibility for its citizens. The state provides only a very partial solution to senior citizens' needs by giving some of them discounts on electricity bills and giving heating grants to another 30 or 40 thousand seniors; but the actual need is far beyond those numbers.

We're just 22 days ahead of the elections for the Knesset. Across all political parties, including those that published their economic platform, there is no mention of the weak elements of society in general and the elderly and the helpless in particular. Everyone's talking about the middle classes, about creating more jobs, about integrating various populations into the work force, and so on. Important issues, to be sure. But no party has spoken out about those who can no longer work for a living and are dependent on the goodwill of the state. Senior officials at the National Insurance Institution admit that the allowances they provide are barely enough to cover half the cost of the basic needs of the impoverished elderly.

The elderly cannot go out and protest. They remain far from the public eye, suffering quietly. This shameful situation cannot go on – it is a blot on the country's honor. As a society, we cannot remain idle. We all bear the responsibility of demanding from the political candidates a real solution for the helpless people. After all, these are our parents, our grandparents, and this is our fate, too, if we do not come to our senses. In Jewish tradition, the elders, with their life experience, had a revered standing; we were obliged to respect them: "Thou shalt rise up before the hoary head, and honor the face of the old man." Longevity used to be a gift that one wished for oneself and for others. In 2013 Israel, old age is something that many have good reason to fear. Old people in Israel, with the decline in their physical functioning and their inability to contribute materially to the country and its economy, are cast away, far from the eye and far from the heart of most of us; and thus they are absent, too, from the agenda of our chosen representatives. This situation is a mark of disgrace for the entire society. We must all do more for the old and the weak in Israel. Rabbi Yechiel Eckstein is president and founder of the International Fellowship of Christians and Jews