Despite statements asserting building in contested area will forge on; PM hesitates to approve projects

After declaring his support for the controversial E1 area construction plans in December, it appears that Prime Minister Benjamin Netanyahu is hesitating to realize the plans.

The controversial building plans underwent several changes since Netanyahu's statement. Their blueprints were approved by the Defense Minister Ehud Barak, but the Prime Minister's Office then ordered not to file them with the zoning committee at this time.

The E1 construction plans raised an international outcry after the prime minister decided on their promotion as a retaliatory measure to the Palestinian Authority's UN status upgrade. 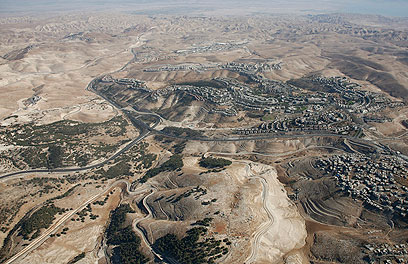 E1. 'All planning is set and done' (Photo: Lowshot)

In mid December the prime minister instructed the Coordinator of Government Activities in the Territories to step up the plans' promotion, and a special hearing was held at the Civil Administration's planning committee, in which two plans, for more than 3,000 housing units were approved.

The plans' realization now depends on the political echelon's decision – which is still forthcoming.

"When it comes to planning, everything is set," a source clarified. "Instructions from the Prime Minister's Office should now go down to the civil administration. I don't know why, but so far they haven't." The Right was furious with the plans' postponement. State Control Committee Chairman MK Uri Ariel (Habayit Hayehudi), was adamant on Thursday: "The halting of the E1 plans by the Prime Minister's Office proves that Netanyahu's statements regarding the settlements are only sleight-of-hand. A day after the elections we'll rediscover the true Netanyahu, the one who froze construction and succumbed to pressure." The Prime Minister's Office did not deny the delay, and said that "There is no change in the decision to continue the promotion of the E1 plan."