Hand that rocks the intifada

The Palestinians in the West Bank have been suffering from an unusual series of attacks by settlers lately – and they have had enough. There are those who wish to protect their land and property with stones. I believe in a non-violent struggle, but I have no alternative to offer them. I have no way of convincing them. And the tensions are mounting.

Just last week at least four attacks were launched from the extremist Esh Kodesh outpost against Palestinians: Palestinian farmers who arrived to plow their fields with the authorization and accompaniment of the IDF were attacked and burning tires were rolled onto their fields; vehicles in the nearby village of Jalud were set ablaze; olive trees were destroyed in Qusra and the words "Death to Arabs" were spray painted. The following night an elderly man and a four-year-old boy were beaten up in a home in Jalud. The extremist settlers from the outposts are trying to push us into another circle of violence that will hurt us all.
2013 Elections
Israeli extremists' victory
Randa Haidar
Op-ed: Arab journalist says rightist victory in elections will exact heavy price from Israelis, Palestinians
Israeli extremists' victory
The field near Esh Kodesh, which is owned by a Palestinian named Fawzi, has seen dozens of settler attacks. For years Fawzi had a hard time entering his own property. The Rabbis for Human Rights organization, which I work for, filed a High Court petition demanding that the army protect the landowner. In light of the petition, the army finally decided to close the area to Israelis. The significance is clear: The directive indicates that even the Israeli military believes the land belongs to Fawzi and recognizes the need to protect him from the aggressors – the Esh Kodesh extremists. The financial damage caused to Fawzi over the years is huge. Last week he arrived at the field, accompanied by soldiers and Border Guard officers, and still the settlers attacked him and even the soldiers. If they are not afraid of the Israeli security forces, because they know they will not be punished, then of course they have no problem hurting Palestinians. 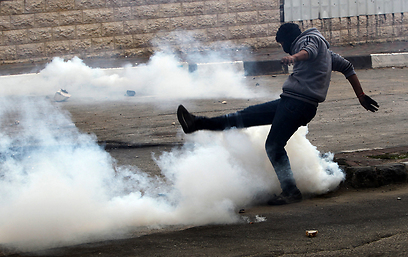 In the West Bank, the Palestinians have no other choice but to escape the oppression. Regardless of whether you are extremist or moderate, religious or secular, Muslim or Christian, liberal or conservative – you are a subject of the occupying military regime and have no basic civil rights. Can you give me an example of a nation that lived under military rule and did not try to revolt and fight? Such a nation does not exist. The current situation is as dangerous as a volcano that it about to erupt. Yet, the majority of Palestinians chose a civil, non-violent struggle to obtain their rights. But when the civil and legal battle proves ineffective, people are tempted to resort to other methods. And when the army does not prevent the extremist settlers from hurting Palestinian farmers – a response will eventually come, and after that another Israeli response. It will end with deaths, and then, God forbid, the rage and pain will spread throughout the West Bank and we will witness another intifada, which will most likely cost us all a lot of blood. No sane person wants this.

This is why I say to the Israelis: Let's stop it now. We are all in the same boat. You cannot push people into a corner, deny them their rights, claim the fields of their fathers for yourself and expect them to bow their heads and surrender. In a place where human rights are respected there is a different atmosphere; it is possible to meet and talk; and even convince and change the extremists' views.

In a place where Palestinian rights are being trampled on and when legal measures and civilian protests do not bring change, rage and despair defeat common sense and moderateness. I want us to live together in peace. Help me do this and protest against those who are destroying our future.