Government moves forward with plan to renovate places of heritage, including Cave of Patriarchs, site sacred to both Jews and Muslims. Palestinians: Tomb is ours

Israel is advancing a plan to invest in places it considers part of its national heritage, including nine West Bank sites, the government said Monday in an announcement that could appeal to hard-line voters a week ahead of elections. It triggered an angry Palestinian response.

Israeli Cabinet Secretary Zvi Hauser said Israel is adding handicapped access to the Cave of the Patriarchs, a sensitive site in the West Bank city of Hebron sacred to both Jews and Muslims.

The US objected to Israel's initial 2010 announcement that it would label the shrine an Israeli heritage site, charging it impeded peace efforts. Palestinian protesters clashed with Israeli troops in Hebron then, and Palestinian President Mahmoud Abbas warned the move could spark a religious war. 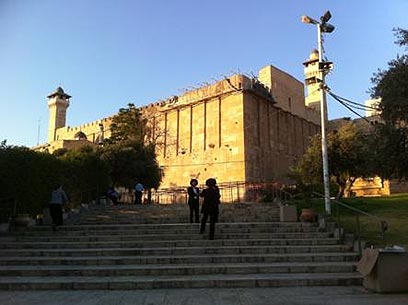 Nour Odeh, a spokeswoman for the Palestinian Authority, called on the international community to condemn the latest Israeli announcement.

"The Tomb of the Patriarchs is a Palestinian site, and the Palestinian Authority is the only one in charge of making any changes to it," Odeh said Monday.

With elections set for next week, Prime Minister Benjamin Netanyahu appears likely to win another term, but his party has been losing seats to a hard-line religious-nationalist faction. The timing of the announcement hinted that he was trying to win back his traditional hawkish voters.

Hauser said Israel has an obligation to renovate the sites, and it is not related to politics.

"You can't change history. Many sites of the Bible took place in Judea and Samaria," said Hauser, using the biblical term for the West Bank. "As long as we're in the territory, it's our national and human moral obligation to take care of and preserve these sites."

Other plans include renovating the West Bank site of Tel Shilo, where Jewish tradition holds the Israelite tabernacle once stood, and possibly building a replica of the tomb of King Herod at the Herodion, a hilltop site near the West Bank town of Bethlehem. Archeologists believe it was the burial site of the Jewish proxy ruler who controlled the Holy Land under imperial Roman occupation two millennia ago.

Under the program, Israel has budgeted about $107 million to invest in about 300 cultural sites and other ventures, including renovating Israeli archaeological sites, digitizing archives and building a museum dedicated to famed physicist Albert Einstein.

Later Monday, Palestinian medical officials reported a Palestinian farmer in northern Gaza was shot dead by Israeli troops. The IDF said an initial investigation disclosed it was not behind the shooting.