Thirty-four hostages and 15 of their al-Qaeda-linked kidnappers were killed on Thursday in an airstrike by the Algerian armed forces, Mauritania's ANI news agency reported, citing one of the kidnappers holding captives at a desert gas field.

The news agency, which has close contact with the group which has claimed responsibility for the mass kidnapping, said the army's attack came as kidnappers were trying to move their hostages in vehicles to a new location.

A local resident confirmed to Reuters that many people were killed after the Algerian military opened fire on the hostage takers' vehicles. 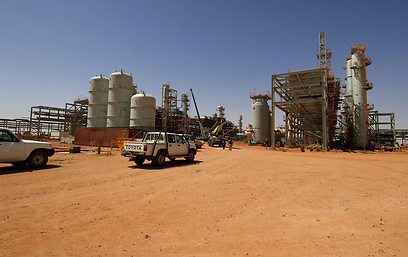 Citing one of the al-Qaeda-linked kidnappers, Mauritania's ANI news agency reported that seven foreign hostages were still alive after the strike.

ANI said a spokesman for the kidnappers told the agency those hostages were three Belgians, two Americans, a Japanese and a Briton. No details were given for the Algerians who were also captured.

An Algerian security official said that around 20 foreign hostages had escaped earlier Thursday.

The gunmen, who seized dozens of foreigners and scores of Algerians at the deep in the Sahara desert, have demanded an end to a French military operation against al-Qaeda-linked Islamist rebels in neighboring Mali.

ANI said that the spokesman for the kidnappers, speaking by telephone from inside the facility, said their leader Abu al Baraa had been killed in the attack.

The hostage-taker warned that they would kill the rest of their captives if the Algerian army approached, ANI reported.