When were you circumcised?

Op-ed: Marriage registration process at rabbinate degrading and racist, must not be allowed to continue

I am getting married in two months. One of the first formal stages on the road to the wedding is opening a marriage file at the rabbinate. In order for this stage to pass smoothly, you have to prove you are Jewish. All Israelis whose parents were not born in the country have to go through this. I thought I would merely have to present some documentation, take part in a short discussion and receive the formal approval. But when I asked friends about the process, I was shocked and infuriated. It turns out that formal documents are not enough. The fact that it says "Jewish" in my mother's Israeli identification card and that it says "Jewish" in my birth certificate is not enough for them.

Last Wednesday I was officially admitted into Judaism. I went through the racist and humiliating process in which my Jewish status was examined at the Haifa Rabbinical Court. A clerk asked my mother a series of questions – how many siblings do you have? Are they married to Jews? Is your daughter married to a Jew? When did your mother and father die? Are they buried in Jewish cemeteries? And so on. Then we were asked to show family albums. The clerk asked, "Who is that in the picture?" My father explained.
No Hope
Why my friends are leaving Israel
Igor Teller
Op-ed: Emigration of well-educated, motivated Russian-speaking Israelis endangers country
Why my friends are leaving Israel
Then my mother was tested on her knowledge of Yiddish. The clerk said "eat," "drink" and "bless" in Yiddish and my mother was supposed to tell him the meaning, but she couldn't remember and failed the test. I just sat there – nervous and humiliated – staring at the State's emblem hanging above the clerk's head. At no point did the clerk introduce himself or explain the nature of the process or why the rabbinate is questioning our Jewish status. We were asked to wait in the hall. More and more couples whose parents made aliyah from the former Soviet Union entered the room after us. Later, at the entrance to the courtroom, a yeshiva student instructed me to put on a black kippah. He didn’t' ask, he ordered me: "Put it on!" We took a seat on the stand opposite three rabbis, who immediately asked me if I am Jewish. Then I was asked if I was circumcised, and if so, where and when. Then it was my mother's turn again. She was getting tired of all the personal questions. Again, where were you born? How many brothers do you have? He repeated some of the same questions and asked her the meaning of more words in Yiddish she did not know. He asked how Pesach was celebrated in our home. Then we were told, somewhat rudely, to wait outside. The clerk's tough and impolite tone led me to believe that we failed the test – that we were not Jewish. Ten minutes later a yeshiva student came out and handed me an envelope which contained the verdict – they decided that I was Jewish and am permitted to get married in Israel. 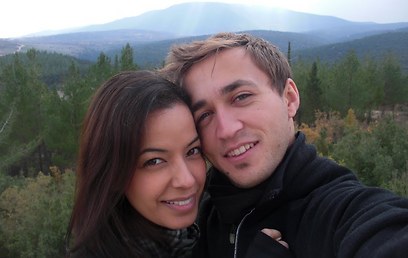 'Have we learned nothing?' Dima and Shlomit

I described my experience on my Facebook page, and I never imaged so many people felt the same way – the same anger and frustration. When I mentioned that I was shocked by my friends' stories, part of it had to do with the fact that they didn't take any action after completing the process. Where's the rage? Where's the justice? I can understand them to some extent; it takes a lot of energy to fight something that seems like a very strong windmill, but I could not remain silent. I could not be trampled on and do nothing.

Compared with other stories I've heard, my experience at the rabbinate went by rather smoothly and did not take too long. The impoliteness and the waste of time did not bother me as much as the process itself, which was horrible. I am not saying the rabbinate should be dismantled, and I didn’t say civil marriage should be allowed in Israel, although it should; however, the process must be changed, and it must not include an "interrogation," a "trial" and a "verdict." What am I guilty of? Such a process cannot be allowed to exist under the auspices of the State. Those who suggest that I should not have gone to the rabbinate must realize that we, as a couple, are not alone. My fiancé's family is traditional and would not accept any other, more modern, process they are not familiar with. So we wanted to avert a crisis, as many couples do. Those who want to send me to Cyprus should wake up. This is not a solution, it's a Band-Aid, and it perpetuates the discrimination. This distortion must not be allowed to continue. It pains me to see that we, the Jews, are the real racists, fascists and, dare I say, anti-Semites. It's as though we learned nothing from the Holocaust. In Germany in the 1940s people were forced to go through the same process I went through, only for a different purpose - to prove that they were not Jews. I was lucky they didn’t measure my skull size and the distance between my nose and forehead. It pains me to see that getting married, apart from the financial burden, also involves a grueling bureaucratic process meant to prove that your grandmother's aunt did not do laundry on Shabbat and that her fourth cousin slaughtered chickens a certain way. To all those who are reading this I want to say: My family experienced in Israel what your grandparents went through in Poland and Germany. If anyone believes it is legitimate to examine personal family albums or test my mother's Yiddish skills to determine whether I am Jewish or not, well, I'm sorry to disappoint you. Where were you when I was circumcised here, had my bar-mitzvah at a synagogue and served in the army? True, I eventually obtained the rabbinate's authorization, but I was left with a sense of great humiliation and worthlessness. My goal is to prevent others from experiencing the same thing, and I hope my story won't end with momentary bitterness, some tongue-clicking and a return to the status quo. Dima Motel, 26, has a bachelor's degree in communications from The Yezreel Valley College and is currently studying for a master's degree in international affairs at Haifa University. In two months he will marry Shlomit Karni, 27. The two met during their army service and live in Haifa