Anti-Jewish slogans of an Egyptian Muslim cleric and past statements by President Morsi to "nurse our children and our grandchildren on hatred" for Jews have come to the fore in the recent days. As it is well-known, anti-Jewish propaganda is not limited to Egypt. Millions of Muslims all over the Middle East have been conditioned to regard Jews not only as the enemies of them but also of all humanity, and hatred for Jews can be found even in textbooks of children going to kindergarten.

Indeed, this outlook has so taken root that hostility toward Jews has even been depicted as a sign of the piety required by Islam. On the other hand, some leaders addressing the Islamic world have deliberately employed anti-Jewish declarations as a requirement of classic rightist propaganda to muster public support.

Certainly this perspective has no place in Islam, and these statements are repeated, either for political aims or out of ignorance, by people unaware that they conflict with the Koran. In the eyes of Muslims that interpret the Koran through reason, love and good conscience, this kind of outlook against Jews is radically false and can never be accepted in anyway.

For a long time Muslims were taught to hate Jews, and now it is time to counter-educate them. When people hear things against Jews they should know that there are pages of verses that praise the Torah, Moses and his followers. As is often the case, taking verses, or hadiths, out of context leads not only to poor understanding, but also to prejudicial attitudes and outright hatred of people who have done nothing wrong. Perhaps even worse is the hypocrisy of those who wish to impose their extremist views by selecting particular verses and hadiths and deliberately distorting the meaning.

One of the main causes of the prejudiced mindset among many is the frequent reference by certain Islamic groups to Jews as being descendents of apes and pigs. According to the Koran, Jews are not a cursed community. Those Muslims who say "All Jews are cursed" are mistaken. The only ones who are "cursed" are certain people who have done wrong against God. God certainly does not curse innocent people. Every person is responsible for his own good or evil deeds.

Every child is born innocent; this is a fundamental tenet of Islamic theology. Thinking that a Jewish child can be born cursed for reasons beyond its control, cursed for no crime, and that no matter what it does it can never escape that curse, has nothing to do with Islam. Such a claim is incompatible with God's justice. What people forget is that God is absolutely just, He is all-merciful and all-compassionate, and God does not inflict suffering on the innocent. He does not punish them for the things they have not done.

To expect such injustice from God means to truly not understand Him. No true believer in God could ever say this.

We are told in the Koran that "God has cursed them for their disbelief" (Koran, 2:88). God imposes the condition of denial. God does not say 'I have cursed every Jew, I regard them as cursed en masse.' He says He curses people who deny Him. Some people who have set themselves up as hodjas and scholars misunderstand this and use it as anti-Jewish propaganda.

This is actually very similar to the threat of a curse in the Torah, where God explains the potential curses in great detail in Deuteronomy, chapter 28 if they don't obey His commandments. 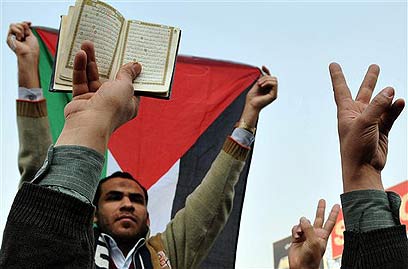 It is also wrong to ascribe this to the Jews alone, or to interpret it in such a way as to apply only to Jews. If a Muslim stands in denial, then he is cursed as well. This is a valid statement for all people, and thus Muslims are also addressed in these verses. People who are immoral, who are cruel or declare war on God's commandments are cursed.

The Koran refers to the community of Moses as people who must abide by the Torah. God sometimes mentions their crimes and sometimes their good acts just like He does with the communities of other prophets. For instance, in one verse we are informed about the existence of righteous Jews as such:

"Of the people of Moses there is a section that guides and does justice in the light of truth." (Koran, 7:159). In another verse He says; "Not all of them are alike: Of the People of the Book (Jews and Christians) are a portion that stand (for the right)..." (Koran, 3:113-115) God also informs that some shall have their reward in the Hereafter (Koran, 2:62).

There are many verses that we can cite showing that while God condemns the evil, He discriminates and praises the good ones among Jews and Christians just like He does among Muslims. Consequently, God discriminates between innocent people and those regarded as cursed, and He explains the conditions of what causes some to be cursed in a clear and straightforward manner.

Furthermore, some Muslims unwisely say that baed on some verses all Jews are descendents of apes:

Again, these are references that refer to the humiliation of those who disobeyed the commandments of God during the time of Moses. God does not call people apes if they do not rebel against His commandments, but some Muslims fail to understand.

It is true that there is a widespread hatred of Jews in the Muslim world. However this does not stem from the Koran, but from various interpretations that do not reflect the spirit of Islam. The way to put things right is for people of reason and good conscience to educate people against terror, radicalism and fundamentalism.

These false beliefs will not come to an end by attacking Islam and Muslims. What needs to be done is to support true Muslims who interpret the Koran and the hadiths in a rational spirit of love and good conscience and to support the unification of the Islamic world.

When Muslims come together under a spiritual authority, instead of an arbitrary model in which everyone says and behaves as he wants under the name of Islam, radical voices will spontaneously disappear.

Sinem Tezyapar is an executive producer at A9 TV, broadcasting from Turkey, Istanbul. She is a political and religious commentator and a peace activist