Op-ed: Realization of 'two states for two peoples' vision unlikely as long as Abbas is in power

A photo is worth a thousand explanations: The connection between Abbas and Ahmadinejad symbolizes the essence of Israel's obstacle on the road to negotiations with the Palestinians.

The greatest tragedy of this region is that Abbas is the best deal around. Following the Arafat era and the illusion of the Oslo Accords, our bar has been significantly lowered. It is enough that the head of the Palestinian Authority does not engage in terror to make him a possible partner for peace.
US Policy
Kerry determined to resolve conflict
Yitzhak Benhorin
Analysis: Unlike Obama, top US diplomat has not lost faith in stalled Israeli-Palestinian peace process
Kerry determined to resolve conflict

It is convenient for the international community to present the difficulties Israel is causing on the road to a peace agreement. These difficulties exist. And yet, we should look at the photo of the two of them together from a realistic viewpoint: Ahmadinejad threatens Israel; Abbas expresses gratitude to the Iranian leader for his support of the unilateral Palestinian statehood bid at the UN.

Israel's experience with withdrawals and peace formulas has been bad. Very bad. When Iran is involved, the efforts become a strategic threat. This was the case with Hezbollah in Lebanon and Hamas in Gaza. You would be hard-pressed to find any Israelis who do not fear another Iranian proxy in close proximity to the large cities of central Israel.

The current political reality in Israel is unclear. Paradoxically, Netanyahu and some segments of the Right have adopted the pragmatic vision of "two states for two peoples," while the Left has adopted the Right's pessimistic outlook, according to which a peace agreement cannot be signed, regardless of the vision. 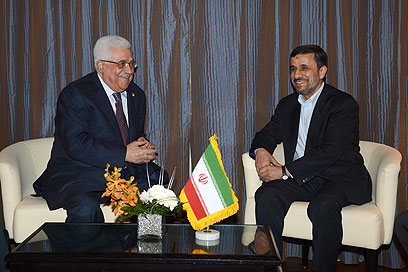 Despite what the Left claimed during the election campaign, it is not a question of diplomatic effort – but a question of ability. Abbas symbolizes the helplessness in the Israel-Palestinian conflict. When the moment of truth arrived, he gave up on an agreement with Olmert, and since then he has been living in the twilight zone of peace. In international forums he speaks of the urgent need for a peace agreement, but on the other hand he is obstructing it.

The tragedy is even greater because the status quo in Judea and Samaria is bad for the State of Israel. It is impossible to sustain another Jewish state with the addition of two million Palestinians, and it is impossible to remain democratic without determining the rights of the West Bank Palestinians.

We must make decisions. While the Palestinians have yet to find a leader who will help them cross the diplomatic Rubicon, we are still undecided about what we really want. The "two states for two peoples vision is worthy," but with Abbas as the leader – it is not at all certain that this vision can be realized in this generation.