Women of the Wall at Kotel

Purim at the Wall

Op-ed: Women of the Wall member describes struggle to pray at sacred Jewish site in a manner traditionally preserved for men

Adar is the Hebrew month of masquerade, parody, and inversion, the month of Purim. In the Scroll of Esther, we reveal hidden links between ancient Persia and contemporary Jerusalem.

Rabbi Shmuel Rabinowitz reigns over the Western Wall and all of the holy sites throughout the modern State of Israel.

"This is Ahasuerus who reigned, from India to Ethiopia." (Esther 1:1)

Holy Site
Zealotry threatens Western Wall
Rabbi Shmuel Rabinowitz
Op-ed: Liberal, conservative fanatics trying to turn Jerusalem holy site into ideological battleground
Zealotry threatens Western Wall
These days, Rabbi Rabinowitz sits as chair of the Western Wall Heritage Foundation, in Jerusalem, the capital. "In those days, king Ahasuerus sat on the throne of his kingdom, which was in Shushan the capital." (Esther 1:2) In the fifth year of his reign, the government approves an NIS 85 million ($23 million) budget for necessary development. Rabbi Rabinowitz also obtains speedy approval for a four-floor Strauss palace. The edifice, occupying 300 square meters on the ground of the Kotel plaza, will house the magnificent chambers of Rabbi Rabinowitz and his Foundation. "There were hangings of white, fine cotton, and blue, bordered with cords of fine linen and purple, upon silver rods and pillars of marble; the couches were of gold and silver, upon a pavement of green, and white, and shell, and onyx marble." (Esther 1:6) In the year 5773, the 17th year of his rule, Rabbi Rabinowitz issues an edict demanding that women appear at the Kotel without a tallit. "But the queen Vashti refused to come at the king's commandment by the chamberlains; therefore was the king very wroth, and his anger burned in him." (Esther 1:12) Women who refuse to submit to his authority are to be gathered from all entrances to the plaza. "Let the king appoint officers in all the provinces of his kingdom, that they may gather together all the fair young women to Shushan the palace, to the house of the women, unto the custody of Hegai the king’s chamberlain, keeper of the women." (Esther 2:3) Rabbi Rabinowitz dispatches police officers to bring the women to the police station where they are to be held under guard. "For this deed of the queen will be spread abroad to all women, and make their male spouses contemptible in their eyes, when it will be said: The king Ahasuerus commanded Vashti the queen to be brought in before him, but she came not." (Esther 1:17) For if it becomes known throughout the lands that women hold autonomous public prayer, don tallitot, bind themselves with tefillin, and read from the Torah, then all the women of the lands will refuse to submit to patriarchal authority - at home, under religion, and under the state. 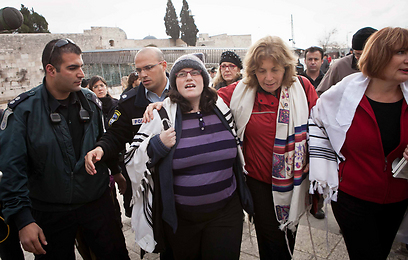 "And when the king's decree which he shall make shall be published throughout all his kingdom, great though it be, all the wives will give to their male spouses honor, both to great and small . . . For he sent letters into all the king's provinces, into every province according to the writing thereof, and to every people after their language, that every man should rule over his house." (Esther 1:20 & 22)

When the officer at the security gate impounded my tallit and tefillin bag, on Rosh Hodesh Adar, he found it contained only a scarf and hat. After I saw that the police were confiscating them, I had handed my tallit and tefillin off to a man. I blessed the officer, "Happy Adar" as the bells on my hat tinkled. Some women stuffed tefillin and tallitot into their pockets and under their sweaters; many women reluctantly relinquished them. One boy managed to smuggle a tallit in for his mother. Are you with me to this point? Do you accept our evasion? No, but given the circumstances, maybe justified? The police confronted me with the choice to hand over my tallit and tefillin, or go home. I stood frozen. Man after man passed by me, entered freely. I deliberated. What on earth do my genitals have to do with prayer, or the Kotel? "And it was so, when the king saw Esther the queen standing in the court, that she obtained favor in his sight; and the king held out to Esther the golden scepter that was in his hand. So Esther drew near, and touched the top of the scepter." (Esther 5:2) With phallic insight, I opted for a mask. My ruse offset humiliation and freed me to rejoice with my prayer community of women at the Wall. I passed through the gates of Adar, of hiding and revealing. "Esther had not made known her people nor her kindred; for Mordecai had charged her that she should not tell it." (Esther 2:10) We were hundreds of women, the most ever, flanked on both sides by police. Positioned behind the partitions to the rear and the side was a strong contingent of male supporters praying along with us. "So Mordecai went his way, and did according to all that Esther had commanded him." (Esther 4:17) Four veterans from the 55th Paratroop Brigade that liberated the Kotel in 1967 reinforced the men's contingent at the rear. Under their protective gaze, the police refrained from interfering with our prayers. Our spirits rose. A couple of courageous young women put on their tefillin in the glorious light of day, perhaps for the first time in the women's section at the Kotel. Multi-colored tallitot blossomed forth from beneath the outer layers we shed as the sun strengthened. Our Hallel praises flowed, a wave of redemptive song across our expansive sea, lapping at the shore of the old Wall. We erupted into a swirling snaking dance, our tzitziot flying. After our honored veterans left us, police detained 10 women outside the plaza gates. We revised our plan to continue at our appointed site, Robinson's Arch. We proceeded through the Jewish Quarter toward Jaffa Gate – to support our sisters held in custody, some adorned with tefillin and tallitot. "So it came to pass, when the king's commandment and his decree was published, and when many women were gathered together unto Shushan the castle, to the custody of Hegai, that Esther was taken into the king's house, to the custody of Hegai, keeper of the women." (Esther 2:8) On a sidewalk opposite the police station, we read from the Torah and completed our services. During the repetition of the standing prayer, two of us blessed our sacred community with the awesome priestly blessing, the most ancient biblical text – for the first time among Women of the Wall. Many passers-by of all ages and shades, religious and secular, witnessed women’s spirited religious expression. At the Kotel, en route, and on the sidewalk, not an unpleasant word was spoken to us. There were smiles, curiosity, and delight. "And the month which was turned unto them from sorrow to gladness, and from mourning into a good day; that they should make them days of feasting and gladness, and of sending portions one to another, and gifts to the poor." (Esther 9:22) As we prepared to leave, I spoke with a man who had accompanied us from the plaza. For 30 years, since he was a five year-old, Aviram went with his grandfather to the Kotel every Shabbat morning. Aviram's grandfather’s parents had carried him as a baby from an ancient exile in Persia home to Jerusalem. Rising with the dawn, Aviram helped his grandfather carry wine, warm cooked eggs, kugel and knish, fish and cakes to feed the poor at the end of the sunrise prayers. Since his grandfather passed away recently, Aviram has been searching for his spiritual path back to the Kotel. Women of the Wall, he confides, have re-awakened his connection to our most sacred space. Bonna Devora Haberman is the author of Israeli Feminism Liberating Judaism: Blood and Ink; and ReReading Israel: The Spirit of the Matter. Her website: http://bonnadevorahaberman.wordpress.com