Palestinians on Sunday called for an international investigation of Israel's treatment of detained Palestinians, after a 30-year-old Palestinian died in custody and a hunger strike by four other inmates sparked a week of West Bank protests.

Palestinian officials and the detainee's family alleged Jaradat was mistreated by the Shin Bet, saying he was healthy at the time of his arrest last week.

Israeli officials said Jaradat died of an apparent heart attack and denied he was beaten or subjected to any treatment that could have led to his death.

The Shin Bet said Jaradat was arrested last Monday, after residents in his village of Saeer said he was involved in a rock-throwing attack that injured an Israeli. Jaradat admitted to the charge, as well as to another West Bank rock-throwing incident last year, the Shin Bet said.

The agency said that during interrogation, he was examined several times by a doctor who detected no health problems. On Saturday, he was in his cell and felt unwell after lunch, the agency said. "Rescue services and a doctor were alerted and treated him, they didn't succeed in saving his life," the statement said.

A Shin Bet spokesman, speaking on condition of anonymity in line with protocol, said Jaradat was not beaten during his interrogation, nor was he subjected to any treatment that could have affected his health.

Jaradat was not on a hunger strike and died of an apparent heart attack, said Sivan Weizman of the Israel Prisons Service. 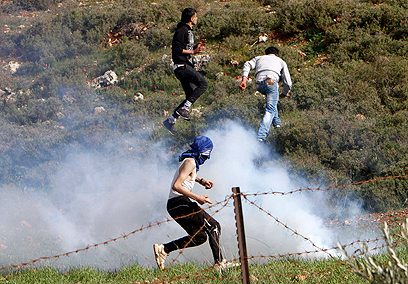 Israel's main forensics institute was to perform an autopsy, with a Palestinian physician in attendance.

Jaradat, a father of a 4-year-old daughter and 2-year-old son, worked as a gas station attendant and his wife, Dalal, is pregnant, relatives said.

His family and Palestinian officials said he was healthy at the time of his arrest, and alleged he was mistreated during interrogation.

The Israeli human rights group B'Tselem also demanded an investigation, including how Jaradat was questioned.

The agency routinely holds detainees in isolation for extended periods during interrogation, keeping them in cells that are lit around the clock and denying them access to lawyers, said Sarit Michaeli, a spokeswoman for the group.

She said that physical mistreatment of detainees has dropped sharply in recent years, but has not disappeared, according to affidavits by released prisoners. She also said detainees have filed some 700 complaints about mistreatment by Shin Bet agents over the past decade, but that none has led to a criminal investigation.