VIDEO - The Israeli Embassy in Argentina, together with the designer Javier Basevich launched the campaign "Amor Mata Atentado (love kills terrorism) ahead of the 21st remembrance day of the terrorist attack on the embassy, which took place on March 17, 1992, taking the lives of 28 people. The campaign was covered by the main Argentinean newspapers, television channels and was also promoted in public spaces such as subway stations and shopping malls.

The campaign features four stories which symbolize the continuation of life and love after the tragic attack, which marked the first time international terrorism hit Argentina.

The photos used in the campaign and were taken by prestigious Argentinean photographer Hernan Churba and depict four different stories which demonstrate the power of life and love to overcome obstacles: 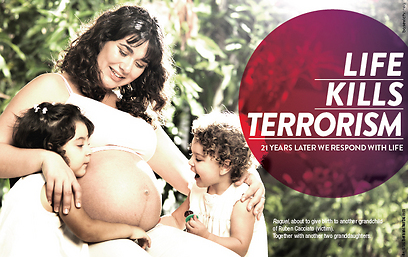 Rachel, daughter of Reuben Cacciato, who was killed in the attack, nine months pregnant with her first daughter alongside his other two granddaughters (Photo: Hernan Churba) 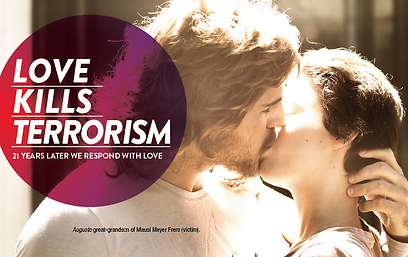 A passionate kiss between the great grandson of Mausi Meyer Frers (victim) and his girlfriend (Photo: Hernan Churba) 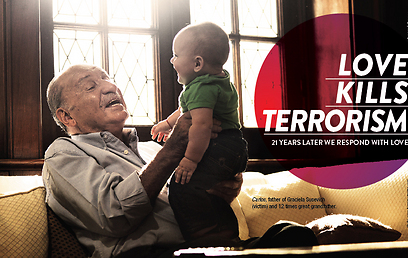 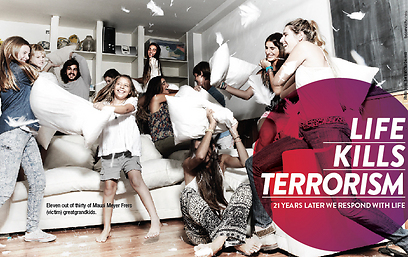 Pillow fight between 11 of the 30 great grandchildren of Mausi Meyer Frers, one of the 28 victims (Photo: Hernan Churba)

"Working in the embassy and being in touch with the survivors and the relatives of the victims of that horrible attack, I was amazed every time to see their love of life and heroic approach towards the future," said Yoav Adler, press attaché of the Israeli Embassy in Argentina.

"That is the message we feel is important to maintain in the public's mind set. For example, Carlos Susevich, who fights for justice for his daughter's death with a hoarse voice and a tired body, is full of life and energy when surrounded by his 12 great grandchildren," Adler told Ynetnews.

"There is also the story of Mausi Meyer, whose granddaughters went on to marry a Jew, a Christian and a Muslim and formed a vast family of 30 great grandchildren, thus demonstrating the power of life and love to create a family, which symbolizes the exact opposite of what terrorism aspires to do."

Lea Kovensky, a survivor of the attack, said: "A movement or way of thought which does not value the lives of others as it values its own, has no future."