Americans are training Syrian anti-government fighters in Jordan, the German weekly Der Spiegel said on Sunday, quoting what it said were participants and organizers.

Spiegel said it was not clear whether the Americans worked for private firms or were from the army but said some wore uniforms. The training focused on use of anti-tank weaponry.

Some 200 men have already received such training over the past three months and there are plans in the future to provide training for a total 1,200 members of the "Free Syrian Army" in two camps in the south and the east of the country. 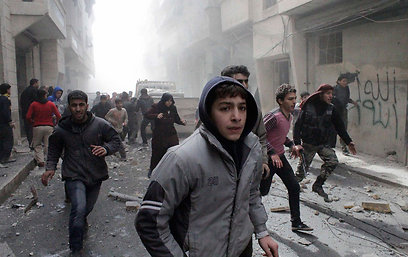 Jordanian intelligence services are involved in the program, which aims to build around a dozen units totaling some 10,000 fighters to the exclusion of radical Islamists, Spiegel reported.

"The Jordanian intelligence services want to prevent Salafists (radical Islamists) crossing from their own country into Syria and then returning later to stir up trouble in Jordan itself," one of the organizers told the paper. The reports could not be independently verified. A spokesman for the US Defense Department declined immediate comment on the Spiegel report. The French foreign ministry and Britain's foreign and defense ministries also had no comment. More than 70,000 people have been killed and 1 million refugees have fled the Syrian conflict. It started as pro-democracy protests but has turned into a sectarian war between rebels mainly from Syria's Sunni Muslim majority and state forces defending President Bashar Assad, who follows the Alawite faith derived from Shiite Islam. The United States has said it would provide medical supplies and food directly to opposition fighters but has ruled out sending arms for fear they may find their way to Islamist hardliners who might then use them against Western targets. Saudi Arabia and Qatar are widely believed to be providing weapons to the rebels, and Arab League ministers decided on Wednesday to let member nations arm them.