The Golan and the coming troubles

The situation on the Syrian side of the Golan Heights is quickly spiraling toward a hardly containable power vacuum which is likely to lead to an increased degree of instability region wide and to an augmentation of the attacks against Israel. The most recent sign of this ongoing destabilization has been shown when 21 UN Filipino unarmed peacekeepers were taken hostage by Syrian rebels. This unprecedented act of violence against non-armed personnel is instrumental in underlying a number of factors which will influence the future security environment in Israel’s northern regions.

The Syrian civil and proxy war has become a war of attrition between government forces and a nebulous network of foreign sponsored and at times competing rebel groups. This reality led the regime to optimize the use of its armed forces, thus leaving regions such as the border with Israel weakly garrisoned. The rise of pro-regime militias backed by Hezbollah is a likely response to these developments.

Such a strategic shift creates an imbalance of force in areas which are strategic for Israel’s defense. The multiplication of anti-regime armed groups, some of which are substantially close to al-Qaeda in tactics and ideology, is making it impossible to have a single entity in control of the Syrian territory, especially over key regions such as the Israeli border.

The steep increase of violence in this area along with allegations of malpractice being raised against UN peacekeepers is bringing the UN disengagement from the Golan Heights closer to reality. This would mean that the Israeli Defense Forces would be the only regular army in control of a part of a border region that the Jewish state and various terrorist and insurgent groups are struggling to control. The pledged help by the US and Arab States to the Syrian rebels effectively means that the Syrian armed forces will not regain power over those contended regions. This may lead to two different scenarios, none of which have a positive outcome for Israel or the international community.

The first one consists of a gradual takeover of the Syrian side of the Golan Heights by Hezbollah. The Shi’a terrorist organization has acquired in the last years an advanced offensive and defensive arsenal and tactical expertise. It has been engaged in the Syrian conflict in combat and logistical operations for almost a year and a half and has direct access to Iranian support and intelligence.

The regime would benefit from such a move as it would clamp down a sizeable number of rebel forces while leaving Assad’s forces for other places in the country. This would have catastrophic effects on Israel’s security calculus as it would mean that Hezbollah acquires a new border with Israel from which it could position its medium range ballistic missiles to target Israeli civilians. In addition to that Hezbollah’s control of the region would limit the transit Assad and Iranian weapons would need to undergo to arrive into the Lebanese terrorist organization. 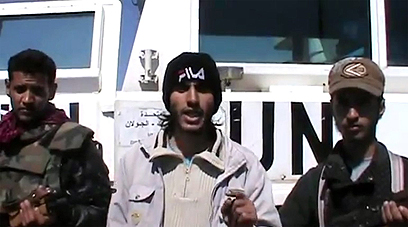 Rebels who captured UN troops near border (Photo: AFP, YouTube)
The second possibility is that with the demise of Syrian regular forces in the area, a number of different rebel groups will share influence over the Syrian side of the Golan Heights. The possibility that groups closer to al-Qaeda and other Sunni terrorist organizations will gain control of strategic communication nodes is high. Due to their sponsor and their tactical expertise these terrorist networks are already having the upper hand against regime forces and rival groups in almost the majority of the engagements they participate in. The takeover of the Syrian border with Israel by fundamentalist Sunni terrorist organizations would lead to a growth of terrorist attacks – or at least attempts – against Israeli targets. In fact, with an increased Hezbollah presence, the balance of power may be altered, but a full blown conflict may be diverted, when on the other hand to gain and maintain legitimacy and popular support jihadi groups would need to step up their terrorist campaign against the Jewish state. Their relatively lower offensive capabilities would result in Hamas-like terrorist attacks mainly centered on the use of inaccurate artillery and rocket barrages as well as suicide bombings. Regardless of the fact that, thanks to well tested defensive capabilities, Israel could minimize civilian causalities, this scenario would not be a sustainable one and in the medium term it makes Israeli cross border actions necessary. These actions may be highly compromised by the volatile situation in Syria. The likelihood that, while retreating or losing ground, Syrian regime forces try to gain popular support by engaging Israeli targets remains low. The fact that the regime did not respond to Israel’s alleged strike inside its territory may be taken as an indicator that Assad does not want to risk the certain loss of men and material in any kind of adventurous attempt to expand the conflict toward Israel. Because of this scenario, international commentators, analysts and policy makers should look at the evolving situation in the Golan with increased attention as the Syrian implosion raises the probability of regional conflict. Riccardo Dugulin holds a Master degree from the Paris School of International Affairs (Sciences Po) and is specialized in International Security. He is currently working in Paris for a Medical and Security Assistance company. He has worked for a number of leading think tanks in Washington DC, Dubai and Beirut. Personal website: www.riccardodugulin.com