Police, rescue forces and president's staff all tying up loose ends before US president arrives

The clock is ticking towards Obama’s Wednesday arrival. A flurry of final preparations are at their height – from security and protocol arrangements, to culinary and entertainment planning – every single detail is being taken into consideration.

At the President’s Residence, home to Shimon Peres, staff is working around the clock to get things ready for Wednesday – a festive welcome ceremony upon arrival and a dinner Thursday evening. On Wednesday, Obama’s motorcade will enter the presidential compound and Obama will step onto the red carpet.

Ninette Cohen, in charge of utility workers on the compound, has the job of making sure everything is placed precisely as it should be and that it all is spotless. “Everyone has energetically pitched in,” she said as she straightened flags. “I'm looking forward to meeting Obama, shaking his hand and taking a photo with him. I will tell him ‘Welcome to Israel, we love you.’”

Obama will be greeted by a children’s choir that will sing the song ‘Tomorrow’ in Hebrew, Arabic and English. Then Peres and Obama will take a short tour of the gardens and plant a tree together. “Together with the Bahai gardeners from Haifa, we’ve been planting a lot of new seedlings," Said Menash, gardner of the President’s Residence noted.

On the agenda for the two presidents is a discussion of the Iranian issue as it relates to the region. At the end of their meeting, they will issue statements.

While this is going on, the country’s US Embassy will be preparing for their event, where they will screen the movie, ‘Welcome Obama.’ A clip made with the assistance of Israeli citizens shows Israelis across the country welcoming Obama.
Welcoming Obama (Video: US Embassy)
X

On Thursday, Obama is scheduled to speak in front of an audience of 1,000 students at the International Convention Center in Jerusalem. Amit Koren, an engineering student at the Technion, knew that in order to win a seat in the audience, he would have to be original. He wrote a poem for Obama. “I was excited when they told me I had been selected. I am crazy for Obama, he is a good president.”

Hila Osovosky, a 12th grader from Givatayim, also won a ticket. “I was excited. It is an amazing experience. I want to hear what he has to say. I hope the message he passes on will be based on support for Israel and will show his plans for the future. He is a charismatic leader who promotes forward-thinking.” 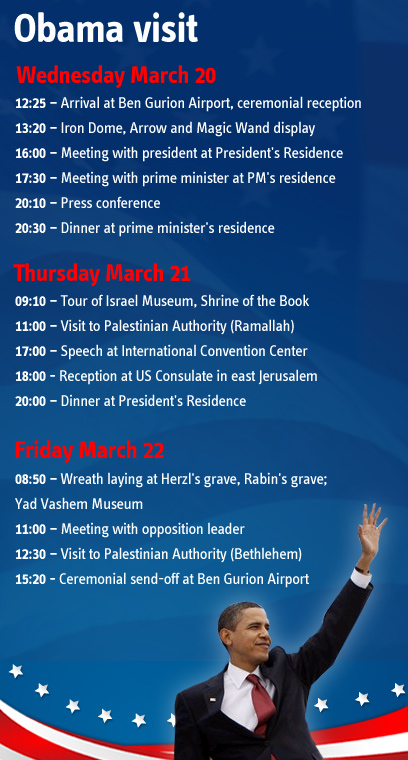 On Thursday evening, Obama and Prime Minister Benjamin Netanyahu will participate in a ceremonial dinner. Only 120 people will be invited to partake, 70 of them Israeli. Yoram Ravid, deputy director of the President’s Residence said, “It was a challenge simply to decide on the list. There was immense pressure to provide invitations to the event. The participants at the dinner are senior members of Israeli society. We tried to create a heterogeneous group covering all colors of the rainbow.” Participants at the dinner include the IDF chief of staff, the Police commissioner, the heads of the Mossad and the Shin Bet, the Supreme Court president, Nobel Prize recipients, former Israeli President Yitzhak Navon, and Professor Suzie Navot. Israeli singers Rita and David D’Or will perform at the event. Peres will present Obama with the Presidential Medal, in appreciation of his contribution to the security of Israel.

Security in the areas in which Obama will visit will be significantly bolstered. Even the cake with figures of the two presidents on it, was x-rayed.

“The President’s Residence looks like a fortress,” said a high level security source within the compound. “The names of everyone who may enter and exit this week were passed onto the Shin Bet already several weeks ago. Only after passing a background check will service providers be able to enter, regardless if they are waiters, or performers.” Major General Nissim Mor, head of Operations for the Israeli Police, said they are prepared for scenarios taken to the extreme, including a variety of possible threats. “In order to perform as expected, we are bringing 5,000 officers into the field each day. The officers will work in shifts of 12 hours and holidays and vacations have been cancelled.” Police helicopters will back up officers in the field and Route 1 is expected to be shut down throughout the visit. At Ben Gurion International Airport, there will be special forces on the ground. A special information center was opened on Sunday to serve the public. It will be run by Jerusalem Police throughout the visit. There have already been hundreds of information requests.

According to Major General Yossi Pariente, commander of the Jerusalem District, police are trying to minimize the effect on the city’s residents, but still, he said, “residents will feel some impact.”